Peeking Behind the Curtain at a $150 Million Bet

Just like Dorothy in The Wizard of Oz, an investor should pay attention to “the man behind the curtain” – or the market insider.

A stock market insider is a director or senior official of a publicly traded company who owns stock in said company.

Insiders must comply with strict disclosure requirements when it comes to buying or selling shares of their company.

Because of those disclosure requirements, we, as outsiders, can follow whether these insiders are bullish on (buying) or bearish on (selling) their company’s stock.

Nobody knows the value of a company or its future prospects better than the people who are inside the business.

As the great investor Peter Lynch famously said, “Insiders might sell their shares for any number of reasons, but they buy them for only one: They think the price will rise.”

Across the board, the studies found that stocks subject to new and unusual volumes of insider buying tend to outdo the market by 6% to 10%.

That impressive statistic is why I told you a year ago that I had just seen the biggest single insider buy I had ever encountered.

Clearly, Watsa was bullish on his company’s share price.

Because the purchase was so enormous, Fairfax was obligated to issue a press release in which Watsa explained why he had gorged himself on shares of his own company…

At our [annual general meeting] and on our first quarter earnings release call, I said that our shares are “ridiculously cheap.”

Watsa’s average purchase price for this massive buy was $308 per share.

In the chart below, we can see, one year later, that Watsa’s purchase was most definitely a buy signal for the rest of us.

He made a huge profit from his aggressive insider purchase.

Fairfax shares are up 45% from his average purchase price. 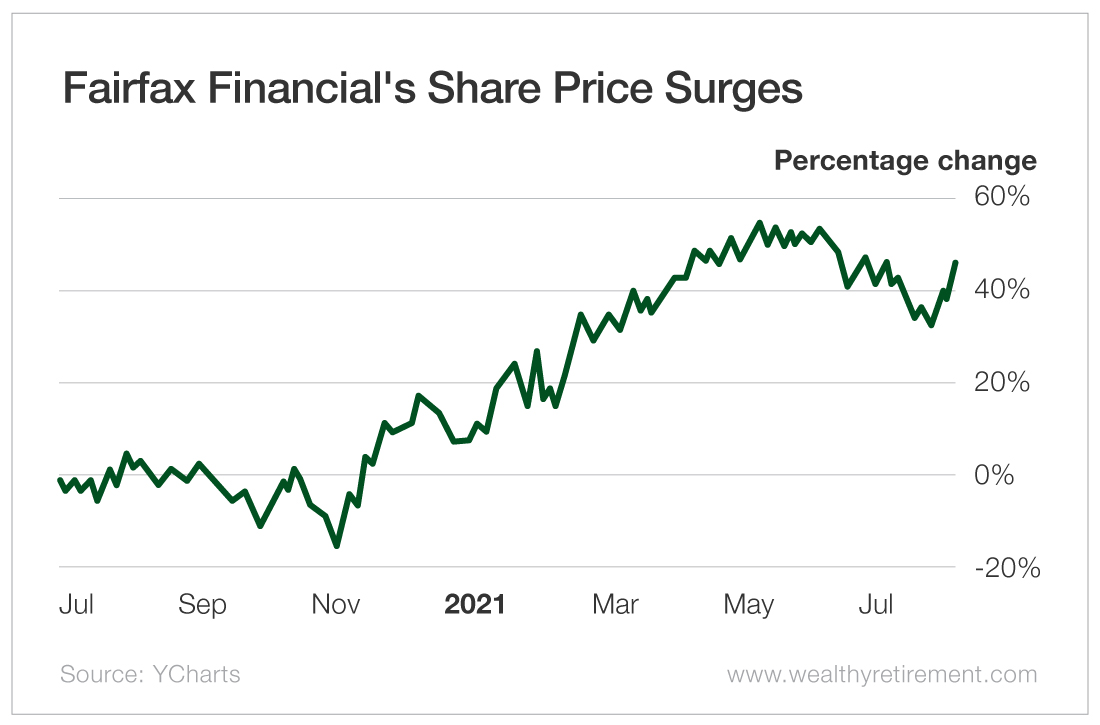 That means Watsa has made a staggering $67.5 million from his investment.

That’s already an incredible amount of money, and I don’t think this trade is even close to being done…

Fairfax Financial has a secret hidden within its balance sheet…

With those convertible preference shares, Fairfax effectively owns 74% of Digit.

Currently, Fairfax carries this Digit investment on its balance sheet at a value of $532 million.

I am certain that’s a massive undervaluation of this investment’s true worth.

Early in July, we got a major data point that confirmed my hunch.

The price that these shares were issued at implies that Digit’s worth is actually $3.5 billion.

That same price also gives us an objective valuation of what Fairfax’s interest in Digit is truly worth.

Instead of the $532 million that Fairfax carries its Digit investment at, the true value is closer to $2.3 billion.

Currently, the stock market seems unaware of this.

When Fairfax revalues its investment upward by $1.8 billion in the third quarter and records a gain in the process, it’s going to be a major catalyst for the stock.

In doing so, Fairfax is going to make Prem Watsa’s $150 million insider buy an even bigger win.

Which Trading Style Fits You?