An exciting new electric vehicle manufacturer, Rivian Automotive, is about to join the world of publicly traded stocks as early as this fall or the beginning of next year with RIVN as its ticker.

I recently dug into the company’s pre-listing S-1 registration filing with the Securities and Exchange Commission to see what I could find out.

Like many people, I’m bullish about the future of electric vehicles. As I’ve written before, there are more than 1 billion automobiles on the road worldwide and at this point, only 10 million of them are electric.

As governments across the globe phase out combustion engine automobiles, hundreds of millions of electric vehicles will hit the road in the coming years to fill the void.

We are on the cusp of a massive transition.

But despite my bullishness on electric vehicle growth, I’ve previously written about my bearish views on both Tesla (Nasdaq: TSLA) and Nikola Corp. (Nasdaq: NKLA).

The product line of electric SUVs and pickup trucks that this company has looks really cool.

That’s not what bothers me.

My problem with Rivian, as with other electric vehicle manufacturers, is the price that investors will have to pay for its stock.

According to Rivian’s S-1 filing, the company is targeting a staggeringly large initial valuation of between $70 billion and $80 billion.

That is a big valuation.

But numbers without context really don’t mean much.

So let me provide some.

Without Profit or Revenue!

Publicly traded companies are usually given value-based prices predicated on some sort of multiple of earnings.

A great growth stock will often be valued at 30 times earnings.

A stodgy old economy slow grower, meanwhile, will be valued at a lower multiple, perhaps something like 10 times earnings.

Over the past 50 years, the average company in the S&P 500 has been valued at just more than 19 times earnings.

Where does Rivian’s price-to-earnings multiple sit with a $70 billion to $80 billion valuation?

The answer is “not applicable” because Rivian has never made any money.

Rivian has never had any earnings – not a dime.

You can’t put an earnings multiple on zero!

Rivian not only has never made any money but also has never even generated revenue.

The table below details the past two years of financial results from Rivian’s S-1 filing.

You can clearly see that over the past two years, Rivian has generated $1.5 billion in losses.

What you can’t see in the table is revenue… because, again, there isn’t any.

There is no line needed in Rivian’s income statement for sales. 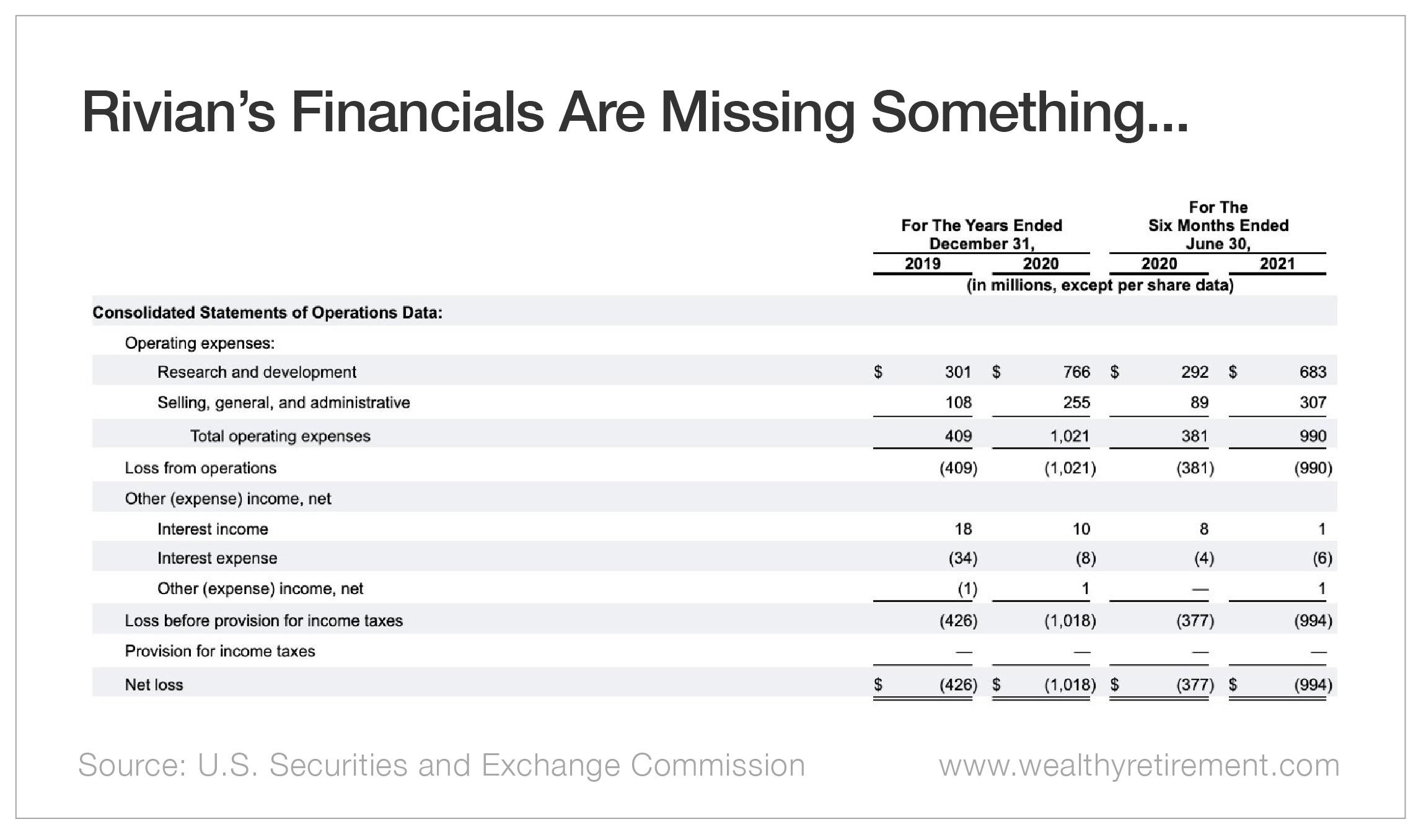 Don’t get me wrong… I understand that the Rivian story centers on the future growth in front of the company.

I don’t doubt that this business will accomplish great things.

What I don’t understand is why people would think that Rivian is likely to ever generate enough revenue and earnings to justify an $80 billion valuation.

And remember, investors who are buying Rivian at this valuation are doing so because they think the company’s valuation is going to go higher from here.

Again, here is where context is so important.

In the chart below, you can see that General Motors Company (NYSE: GM) is ahead of its peers. Nothing odd there, right? 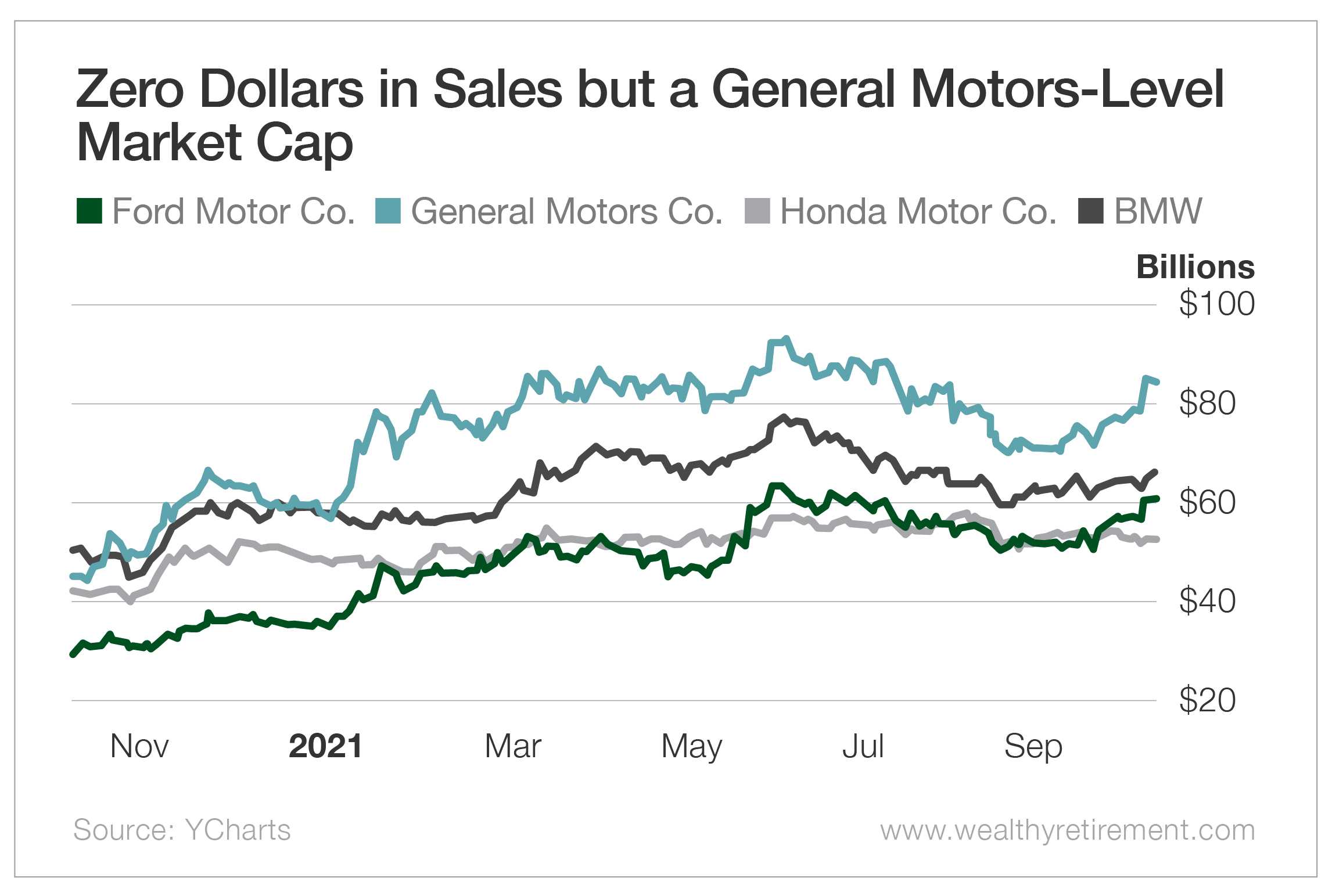 This chart stops making sense only when you realize that Rivian is seeking a valuation as high as General Motors’.

How could Rivian, with zero earnings and revenue, be worth anything close to what existing automakers are worth?

All of these companies have annual revenue in excess of $100 billion, while Rivian has none.

And all of these established automotive manufacturers are actively selling and developing electric vehicles of their own and are ready to pounce on Rivian’s target opportunity.

The deciding factor for these classic auto giants is that they have much deeper pockets than Rivian, decades of experience in the business, and billions of dollars’ worth of existing plant facilities and skilled labor.

Buying Rivian shares at this proposed valuation must surely be considered speculation, and I wouldn’t call it a smart play.

It’s Been Rough Sailing for This 12.3% Yielder