I am astounded by the amount of money that is projected to flow into ESG (environmental, social and governance) investments over the next few years.

This trend is also known as sustainable investing, or investing with a conscience.

BlackRock conducted a survey with 425 of the world’s largest institutional asset managers.

BlackRock’s survey found that this group plans to have 37% of that $25 trillion invested in ESG assets within five years.

Meanwhile, BlackRock has announced that all of its $7 trillion of assets under management will be invested using ESG considerations going forward.

That means the amount of cash invested in this sector is about to increase exponentially.

As an investor, I want to be in this area before all of that money pours in.

If you haven’t previously dug into this trend, let me quickly catch you up.

The intent of the movement is to direct capital toward only businesses that are doing good things for the world.

To determine whether a company meets ESG qualifications, companies are measured against a certain level of environmental, social and governance standards.

Environmental standards consider how a company performs as a steward of nature.

You might consider a company’s carbon footprint, use of water, recycling and safe disposal practices.

Social standards measure how a company manages relationships with people.

That would include employees, customers, suppliers and the communities where it operates.

Social considerations would be the treatment of employees, ethical supply sourcing and public stances on social issues.

Governance deals with how well a company respects shareholder rights and whether it operates in an ethical manner.

This means looking at executive compensation, board of director independence and transparency in communicating with shareholders.

With the amount of money that is heading to the sector, ESG investing has the potential to do good things for our portfolios.

The share and bond prices of these companies will be priced at higher valuation multiples of earnings, cash flows and asset value by the market.

At the same time, prices for companies that don’t measure up to ESG standards are going to lag.

As of today, we are not late to this trend.

After taking off in 2005, ESG exchange-traded funds (ETFs) reached $1 billion in assets in two years.

With money dribbling in, it took 12 additional years for these ETFs to hit the $5 billion mark.

In the following 18 months ending in April 2020, ESG ETF assets surged from $5 billion to more than $25 billion. 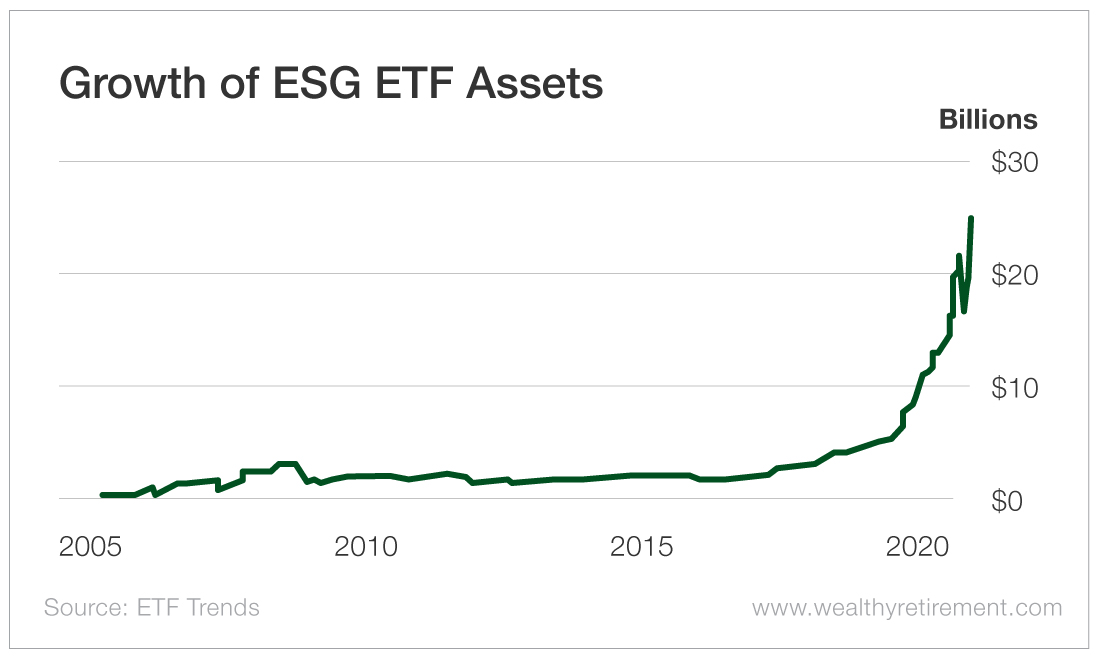 Over the remainder of 2020, the money flows accelerated further. ESG ETFs now hold $47 billion in assets.

But this recent growth isn’t the end.

As the BlackRock survey I mentioned earlier shows, there is much, much more to come.

The sustainable investing train is now officially starting to leave the station. We will want to get on board.

In the coming weeks and months, I’m going to pick through the multitude of ESG-friendly investment products.

Some are good. Some aren’t.

I’ll introduce you to the very best ones.

That way, we can generate some excellent investment returns and also help make the world a better place.

P.S. Did you catch Chief Income Strategist Marc Lichtenfeld’s State of the Market YouTube video on ESG investing? If you missed it, watch it here for free!

Start Spreadin’ the News – Is This 6% Yield Leaving Today?

What to Do When the Market Asks You...

Why Oil and Gas May Be a Bargain...