It was an aha moment for me. No, I wasn’t watching the music video for A-ha’s iconic song “Take On Me.”

It was early in my career, and I was at a technical analysis conference. There, I learned that the market is a forward-looking mechanism. It doesn’t react to news – it often “predicts” it.

That doesn’t mean events can’t move the market on a short-term basis. But for the most part, the big market moves are trying to tell you something – if you’re willing to listen.

For example, most people agree that the Great Depression started when the market crashed in 1929. The Great Depression is viewed as having hit its lowest point in 1933, after nearly half of the country’s banks had failed. However, the stock market actually bottomed in May 1932, not 1933, and then it rallied sharply for the next five years.

While 1932 to 1937 were hardly the years of champagne and caviar, the market increase that began in 1932 signaled that things weren’t getting worse.

Fast-forward to the 1960s, when the market peaked in October 1968 and the annual growth rate for U.S. GDP was 4.8%. By 1970, that GDP growth had turned negative. Stocks bounced until December 1972. The U.S. officially entered recession in late 1973 and did not exit it until March 1975. But again, the market bottomed first, hitting its lowest point in September 1974.

To be clear, a market bottom doesn’t sound the all-clear immediately, but it does foreshadow that things will get better – or at least not get worse.

Prior to the Great Recession of 2008 to 2009, the market started dropping, and when the market bottomed out in March 2009, things were still pretty rough. There was still speculation that the U.S. economy would go over a cliff. Unemployment was at 8.5% (and it kept rising until November 2009).

But the market was telling us that the much-feared and anticipated economic Armageddon was not going to happen. 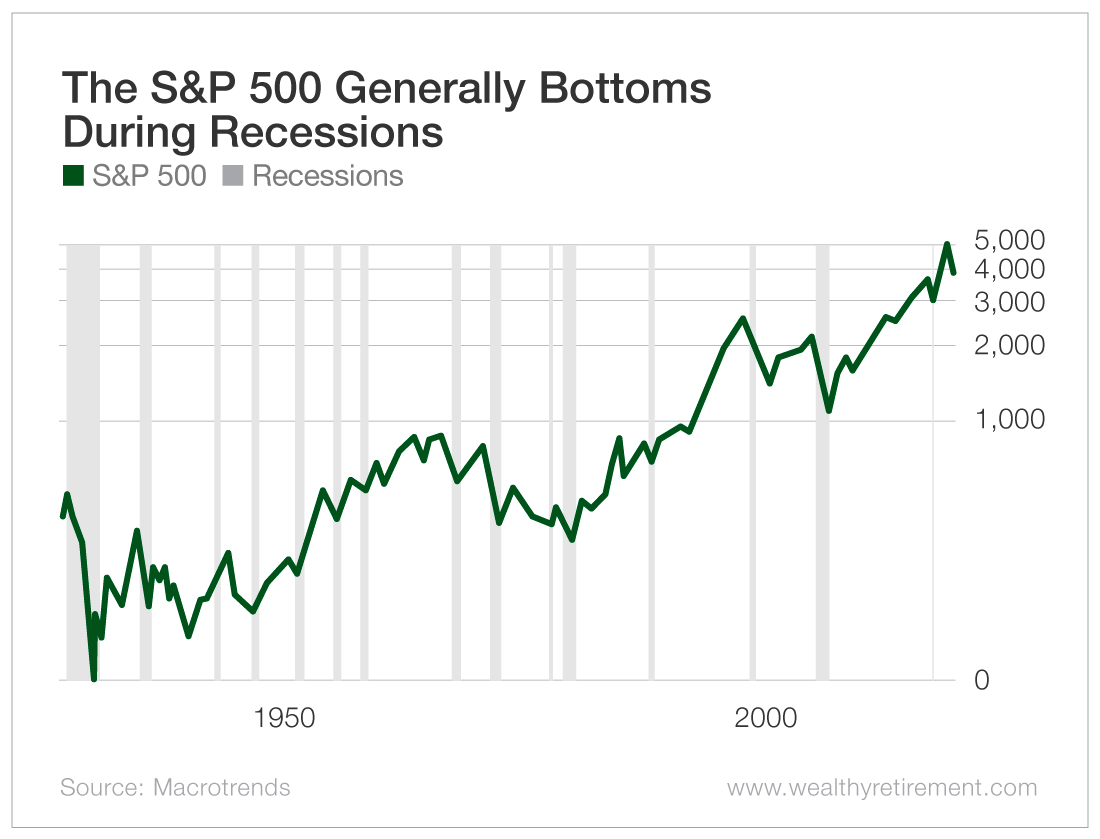 The chart is an excellent indicator for what will occur six to 12 months out.

What does that mean today?

If we see the market continue to bounce and go on to make new highs, it’s safe to say the recession is over and that it was a very mild one at that. If markets turn lower in the near future, we may be in for more difficult times.

Don’t listen to the media and rely on its experts to try to figure out whether we’re in a recession and, if so, how bad it could get. Most media sources have biases – some very strong. On the other hand, the market is neutral. It doesn’t care whether you’re a Democrat, Republican, Libertarian or Communist, for that matter. (Though, if you’re a Communist, you’re probably not reading this or particularly interested in investing – after all, the government will “take care of you.”)

The market is, and long has been, an excellent barometer for where our economy is headed six to 12 months into the future. Keep an eye on it, and you’ll know whether the recession is about to get hairy or whether we’ve already pulled out of it.

How to Correctly Use Moving Averages

This Yield Surged – but Is It Sustainable?