I heard it at least three times at The Oxford Club’s 2021 Private Wealth Seminar in Colorado Springs, Colorado, a few weeks ago…

“What should I be most worried about in the market right now?”

And while, individually, each is cause for concern, the combination of these three factors has created the ultimate threat to your portfolio right now…

As Chief Income Strategist Marc Lichtenfeld demonstrated in his presentation at the seminar, inflation is like asking for change for $20 and getting $15 back.

Marc has been pounding the table since September 2020, saying that inflation would start to rise faster than most people expect.

Over the past year, the yield on the 10-year Treasury has surged. 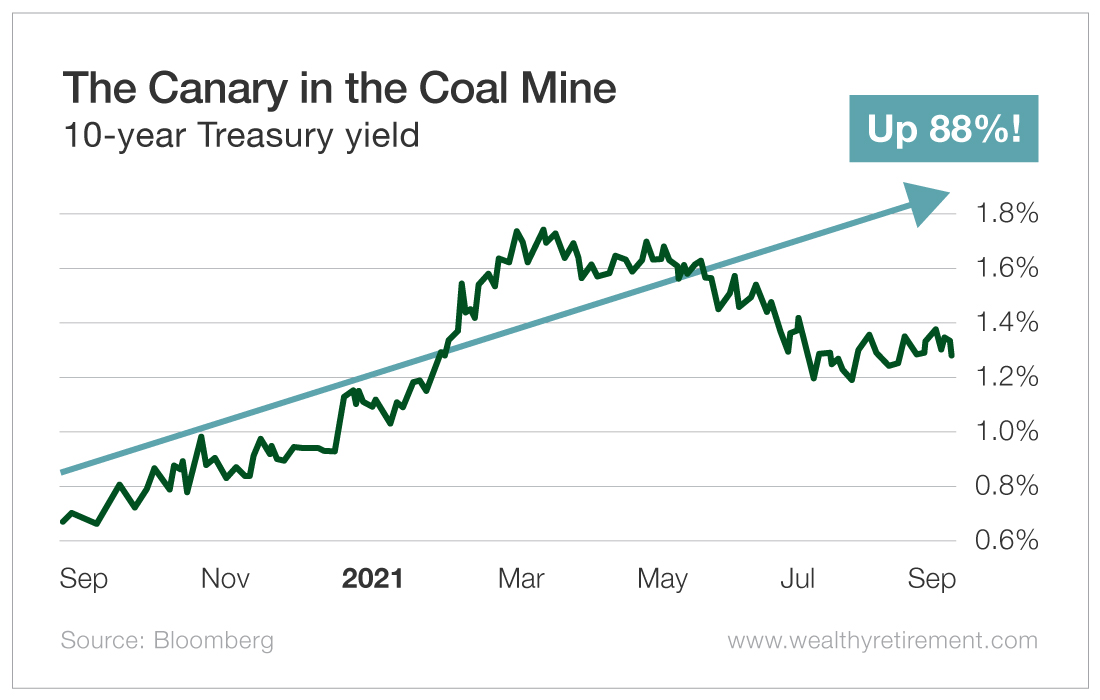 And according to Marc, the yield on the 10-year Treasury is the canary in the coal mine…

When it takes off, inflation will quickly follow suit.

Currently, the federal funds rate is near zero. The Fed set such an extremely low rate to encourage borrowing and spending when COVID-19 shut down the economy.

On the other hand, longer-term Treasury rates (like that of the 10-year) aren’t as easily manipulated by the Fed. Those rates are mostly set by the free market forces at work in the bond market. And those forces are accurate in predicting what the future holds – hence the canary in the coal mine.

If the bond market senses that inflation is coming, longer-term interest rates will rise. And that’s exactly what is happening now.

Longer-term rates rise if there is concern over inflation because the market is working to offset the expected loss in purchasing power that inflation will inflict.

If you lend the U.S. government $1,000 for 10 years and serious inflation kicks in, the purchasing power of that $1,000 will be greatly diminished by the time you are repaid.

So if you hadn’t received more than 3% in annual interest from that 10-year Treasury, your investment would not have generated any profit for you.

That’s why if there’s any indication that inflation is coming, the market will demand a higher interest rate.

With the yields of the 10-year up 88% year over year and rising, it’s clear the bond market anticipates that inflation is coming – and fast.

But all is not lost.

Rising inflation could be a threat to your portfolio, sure, but it could also be an opportunity – if you prepare your portfolio properly.

Marc talked about four such companies in his presentation at the Club’s Private Wealth Seminar. All of the companies he recommended saw gains in the week following the seminar.

One of the opportunities Marc discussed for conference attendees and livestream viewers shot up a staggering 82%!

But according to Marc, the biggest opportunities don’t lie in specific sectors but in a specific type of investment.

Companies that have a long track record of increasing their dividends year after year – Perpetual Dividend Raisers, as Marc calls them – will increase your buying power and outpace inflation.

Recently, Marc met with former director of the National Economic Council Larry Kudlow – a past advisor of former President Donald Trump – to analyze some of the biggest threats to your wealth, including inflation.

And in THIS video, Larry and Marc inform Americans on how to brace their portfolios for the coming storm. In addition, Marc reveals the one key metric to look for in the next stock you buy.

You won’t want to miss it.

Keep Calm and Carry On

Fight Back Against Inflation With Perpetual Dividend Raisers