By that, I mean it’s one that you can put in your portfolio today and hold for years, if not decades, to come.

The company offers everything that I’m always looking for as an investor: long-term growth, top-notch management and a solid dividend.

I wish I had made that one decision to put Brookfield Renewable into my portfolio and leave it there 20 years ago when I discovered the company. 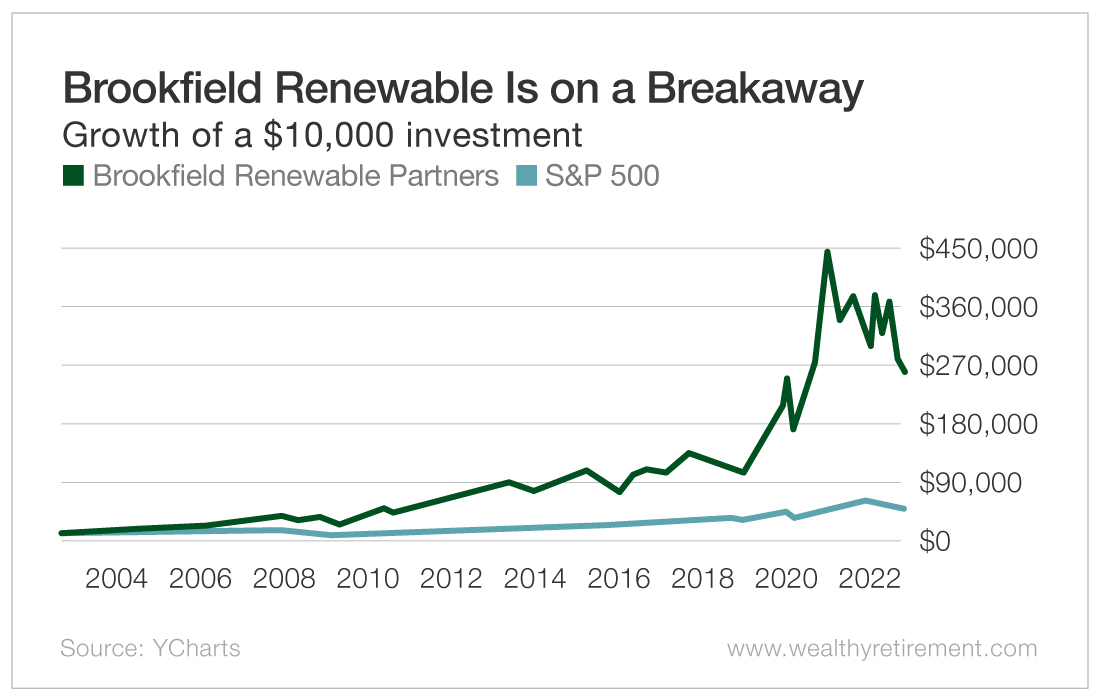 You might think that with this kind of performance already behind Brookfield Renewable, the upside in it might be limited.

I can assure you that is not the case.

This business has the ultimate macro tailwind. Brookfield Renewable is a leading player in the world’s transition to renewable energy.

There is no bigger growth industry right now. Over the next three decades, decarbonization is expected to be a commercial opportunity exceeding $150 trillion.

As one of the biggest players in the sector, Brookfield Renewable will get its fair share of this opportunity.

The company has more than $70 billion invested in hydroelectric, wind, solar and storage facilities globally.

To be clear, this isn’t a company that made a lucky bet on a renewable energy technology that has paid off. Instead, this business was built on growing the reliable cash flows that are tied to crucial energy infrastructure.

The business is more like a steady, predictable utility. The growth is like something out of the tech world.

Despite Brookfield Renewable’s excellent 20-year track record, the reality is that the transition to renewable energy is just starting to accelerate.

The company’s management has guided for at least 10% growth in cash flows per year over the next five years, and the opportunity extends years – realistically decades – beyond that.

As Brookfield Renewable’s share price has increased, so too has the cash that it distributes to shareholders.

Management intends to keep growing the dividend annually by 6% to 9% per year, which is a lot for a stock that already yields 4.8%.

The tough stock market this year has been kind to us and has cut Brookfield Renewable’s stock price by more than 27%.

That sets up a very attractive entry price for a stock that yields just under 5% and can grow its business by 10% per year indefinitely.

And while I believe that this one is the ultimate long-term hold, there is a near-term catalyst that should get the stock price moving in the right direction.

When the market sees that the Federal Reserve is finally done raising rates, it’s going to start bringing investors back to Brookfield Renewable’s stock.

Brookfield Renewable is one of the best combinations of yield and double-digit long-term growth that we are ever going to find.

Against the massive, very long-term growth this business has in front of it, The Value Meter rates Brookfield Renewable as “Extremely Undervalued.”

3 Strategies to Beat Financial Stress in 2023

This Founder-Led Company Has Plenty of Growth Ahead...