Why the Age of Oil Will End With a Bang

After more than a century, it appears that the age of oil is drawing to a close.

Governments everywhere have pledged trillions of dollars toward the transition to clean energy.

China, India, Britain, Korea, Japan and now even the United States are moving in the same direction: away from hydrocarbons.

While that doesn’t sound very bullish for the price of oil, in the short and medium term, I’m growing convinced that it actually is…

The world’s oil producers are slashing spending across the board.

Those spending reductions are going to have a big impact on medium-term oil supply.

The moment an oil producer puts a new oil well into production, the rate at which it produces immediately starts declining.

So for oil producers, these production declines create a never-ending treadmill. Producers have to constantly spend money on drilling just to stay in the same place.

To grow production, they need to spend even more.

According to Exxon Mobil (NYSE: XOM), global production from existing oil wells declines at a rate of 7% per year.

On a base of 100 million barrels per day (bpd) of production, that means the world will lose 7 million bpd of production over the next 365 days.

Without sufficient spending on new wells, global production will fall.

Historically, spending enough on new wells to offset declines hasn’t been a problem.

The oil industry has always notoriously borrowed aggressively and burned through every penny of its cash chasing production growth above all else – often creating no value for shareholders.

But now things are different for two reasons…

Without these big boys growing new production, oil supply is set to suffer in both the near and long term.

Demand Will Fall Eventually, but Not Yet

Prices are always determined by the relationship between supply and demand.

While huge spending cuts are set to hit short- and medium-term oil supply, demand is not projected to fall until far out in the future.

In China and India, where billions of people live, oil demand is expected to continue growing for a while.

Eventually, the transition to renewables will cause global oil demand to peak. But it can’t happen overnight.

Reuters recently provided a recap of when oil market analysts are forecasting global demand to peak.

Last week in its investor update, the French oil major Total warned that it sees a big oil supply shortfall coming by 2025.

By big, I mean a shortfall of 10 million bpd. 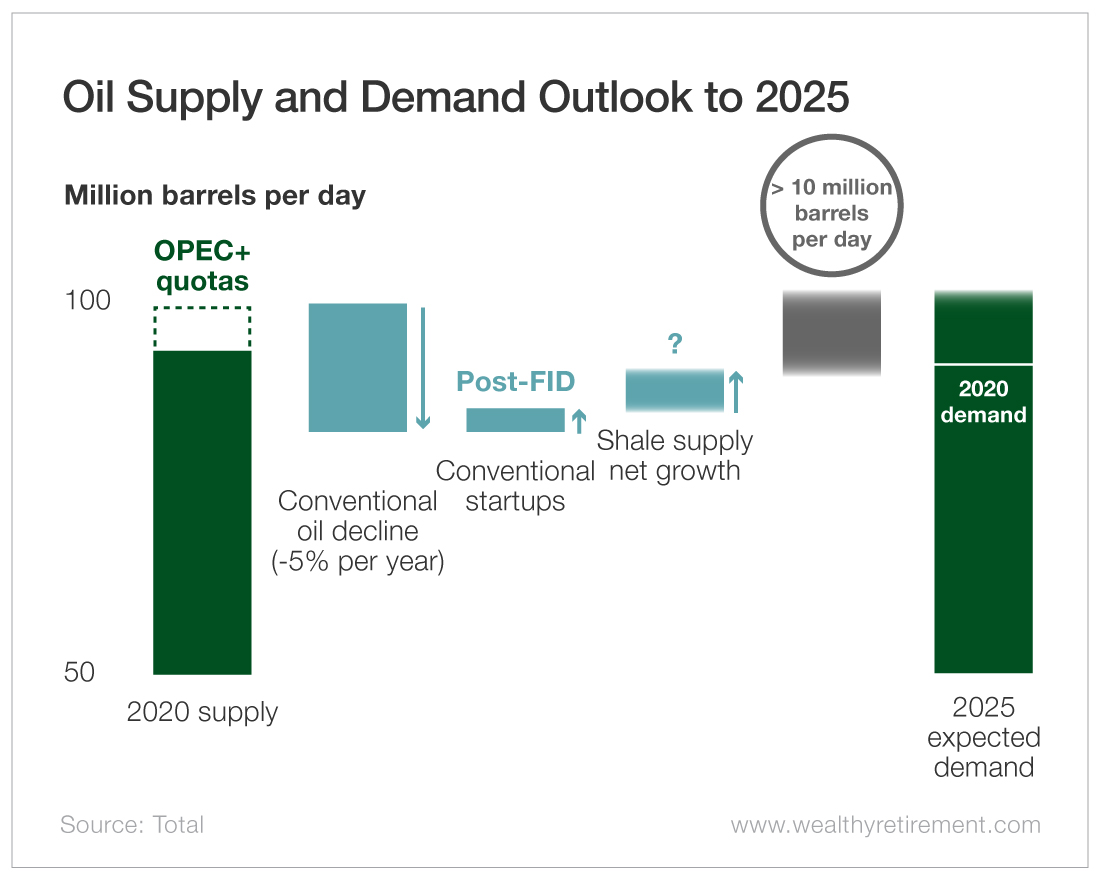 That is a massive shortage.

If Total is correct and the oil market is headed toward a situation where it is undersupplied by this much, the price of oil is going to surge.

So while the age of oil might be ending, it isn’t going to end without a bang.

What Does Falling Cash Flow Mean for This Perpetual Dividend Raiser?

The No. 1 Secret to a Wealthy Retirement

The Energy Sector Is Just Getting Warmed Up...