Stock market declines like our current one can be wonderful opportunities to build our portfolios.

We can buy more shares of great companies at even better prices.

And all the while, these companies themselves can also use stock market sell-offs to their advantage.

Companies with excess cash can add incredible value to their shareholders’ portfolios by buying back their stock when it’s significantly undervalued.

In December 2021, I introduced you to Brighthouse Financial (Nasdaq: BHF).

We have done all right with Brighthouse shares since then, with the company’s stock holding up much better than the overall market. 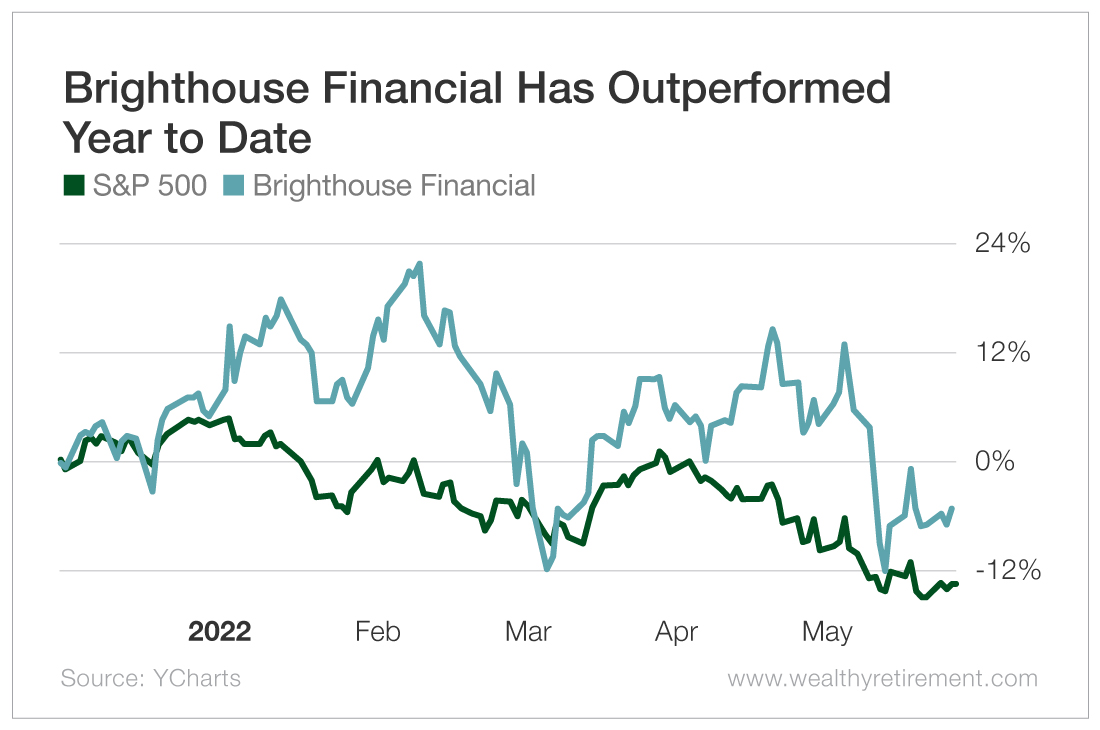 But like most companies’ shares, Brighthouse’s shares have cheapened over the past several months.

My specific reason for writing about Brighthouse in December 2021 was the company was intelligently utilizing share buybacks.

Brighthouse is one of the largest providers of life insurance and annuities in the United States.

Brighthouse was spun off from the much larger MetLife (NYSE: MET) in August 2017.

As frequently happens when a smaller company is spun off from a parent company, shares of Brighthouse were sold off hard by institutional investors who receive them. 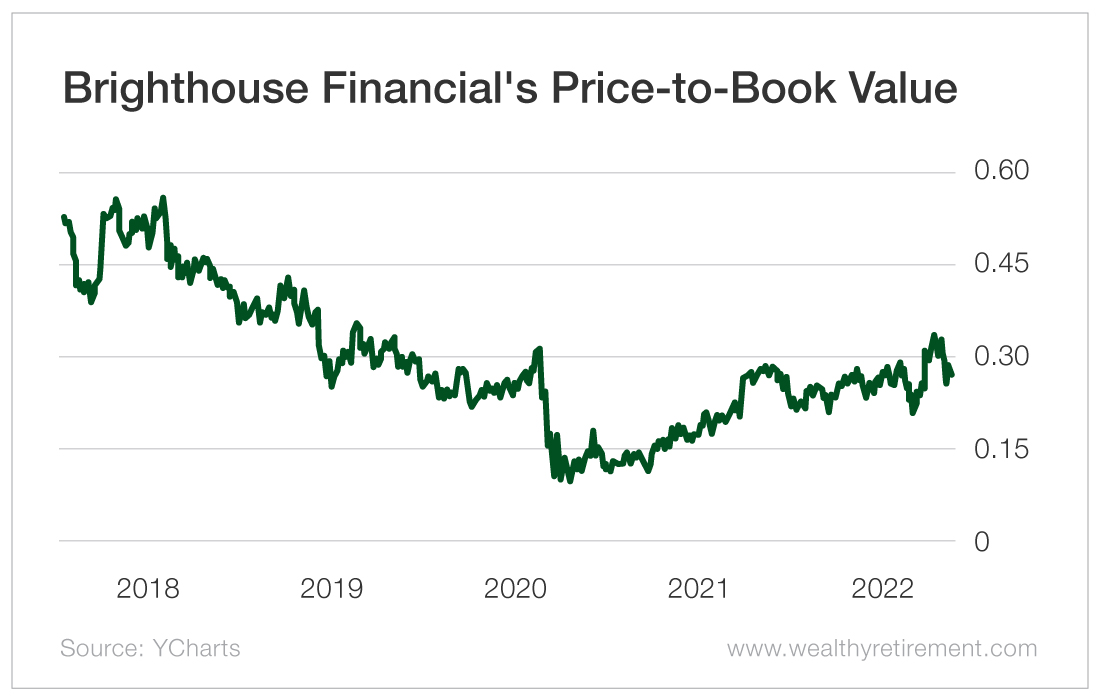 Book value is the value of a company’s total net assets.

Insurance companies generally trade at one times book value or slightly above.

With Brighthouse now trading at 0.27 times book value, this off-the-radar company’s shares are trading for $0.27 on the dollar.

The stock market has given Brighthouse a lemon when it comes to valuation.

However, Brighthouse’s board of directors has chosen to make some delicious lemonade…

Rather than getting frustrated by the rock-bottom valuation, Brighthouse’s board of directors continues to exploit it.

From the start of 2018 through today, Brighthouse has reduced its total share count from 120 million to less than 75 million.

In doing so, it has reduced total shares outstanding by more than a third. 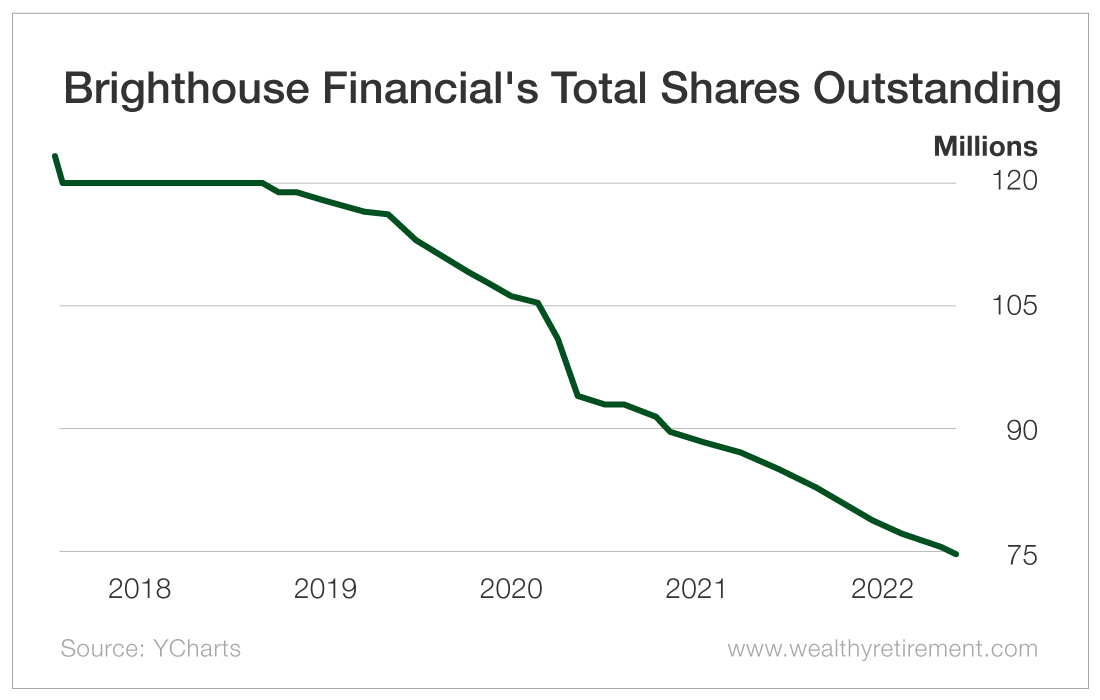 By steadily buying back shares at such a huge discount, Brighthouse is increasing value per share for remaining shareholders.

You can see below how much annualized book value per share has grown as a result of Brighthouse’s savvy share buyback campaign. 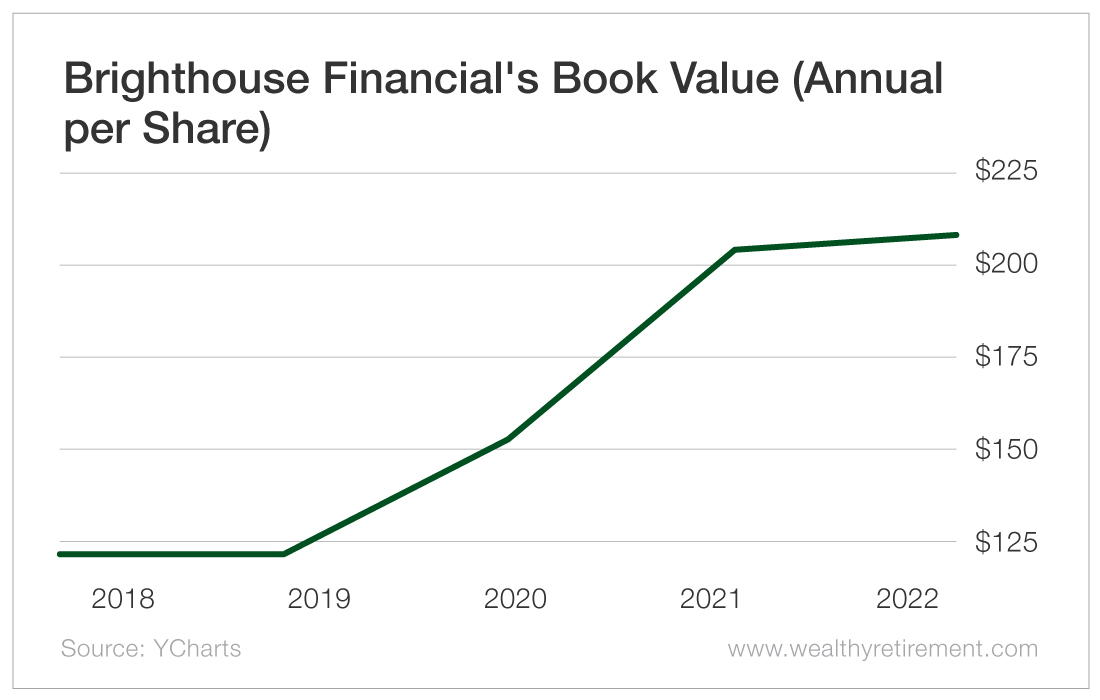 The Bargain Has Sweetened

Brighthouse shares remain dirt cheap, and the company continues to repurchase them with excess cash.

Like all insurance companies, Brighthouse has suffered for years under rock-bottom interest rates.

Considering how much interest rates had increased through the end of March, investment earnings over the next five years for Brighthouse are now projected to increase by $2 billion.

With 75 million common shares outstanding, that extra $2 billion in interest revenue equates to an extra $26 per share in earnings.

Considering that Brighthouse currently trades for around $48 per share, that’s a huge piece of good news.

I’m sure that Brighthouse shareholders are frustrated with how low the company’s stock price still is.

But the truth is that the longer Brighthouse shares continue to trade at this incredible discount, the better it is for investors who intend to hold for the long term.

The more shares that Brighthouse can repurchase at these deeply discounted prices, the more valuable each of the remaining shares becomes.

Eventually, the share price will move toward the true net asset value of these shares, which is multiples of the current share price.

Either that or the company forces the realization of full value by selling itself to a buyer at a fair price.

Those are both great outcomes in my book.

There’s a Lot to Like “Aboot” This 3.7%-Yielding Dividend

Are You Gambling With Your Retirement?

The Only Two Things You Need to Know...

Canadian Oil Producers Can Save the West

How to Pick the Next Great Stock

A YEAR’S Worth of Returns in a DAY

Three Stocks to Beat Back the Bear