We Hit a Home Run… Now Warren Buffett Wants In

We learned that Buffett spent an astounding $51 billion on publicly traded stocks in the first three months of the year. 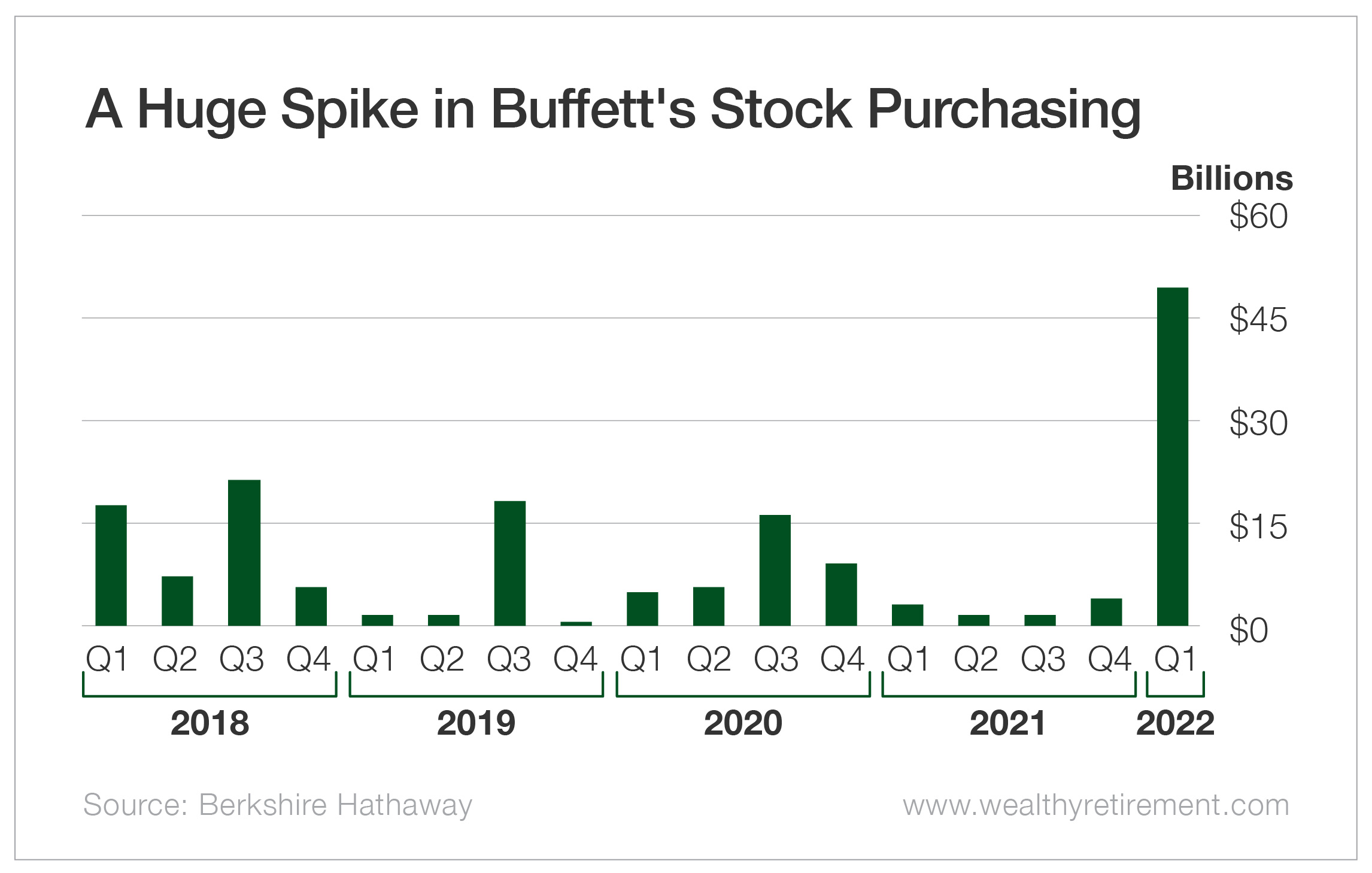 As always, perspective is key.

Consider that last year, Buffett’s most aggressive quarter saw him purchase just $3.4 billion worth of stocks.

And from the first quarter of 2019 through the fourth quarter of 2021, his average quarterly purchase was $4.7 billion.

That means in the first quarter of 2021, he spent 10 times more on stocks than his quarterly average of the prior three years.

Berkshire’s quarterly filing didn’t give the specifics of the stocks the $51 billion was used to buy.

But we can piece much of it together.

First, Berkshire noted in its quarterly Form 10-Q filing that 66% of its equity portfolio is now concentrated in these four stocks:

The first three haven’t changed from the end of the prior quarter. However, at the end of 2021, Berkshire owned only $4.5 billion worth of Chevron shares.

Twenty billion dollars is a huge amount of cash to put into one stock, even for Buffett.

We’ve seen him get that aggressive on a single security only a couple of times before.

Second, we know that Buffett purchased at least $7 billion worth of Occidental Petroleum (NYSE: OXY) earlier in the quarter.

We know that because Berkshire had to file a report with the Securities and Exchange Commission detailing an ownership stake of almost 15% in the company.

That means Buffett has pumped at least $27 billion into oil and gas producers so far in 2022.

Third, earlier in the first quarter, Berkshire disclosed that it made a $4.2 billion investment in HP Inc. (NYSE: HPQ). The purchase represents an 11% ownership stake and makes Berkshire the largest shareholder of HP.

Fourth and finally, Berkshire’s quarterly filing revealed that the company’s cost basis on investments in the financial sector has increased by $10 billion.

That means Buffett has been buying up financial companies (banks or insurers) that have yet to be disclosed.

This financial sector investment is interesting given that Berkshire has already made an $11 billion offer to acquire financial company Alleghany Corp. (NYSE: Y), which was accepted and is expected to close in late 2022.

In other words, we can account for $41 billion of Buffett’s recent $51 billion buying spree.

The other $10 billion worth of stocks remains a mystery…

An Interesting Bet on Energy

The stock market got off to a brutal start in 2022.

No wonder, then, that a lifelong contrarian like Buffett is stepping up and buying stocks in bulk.

But here’s the thing… Buffett isn’t buying low here. Unlike many other sectors, which are down in discount territory, energy has been hot for a while now.

And the share prices of Chevron and Occidental Petroleum had already soared before Buffett started buying up shares.

By getting greedy with the shares of these oil producers in 2022, Buffett is paying far more than he would have at any point over the past few years. 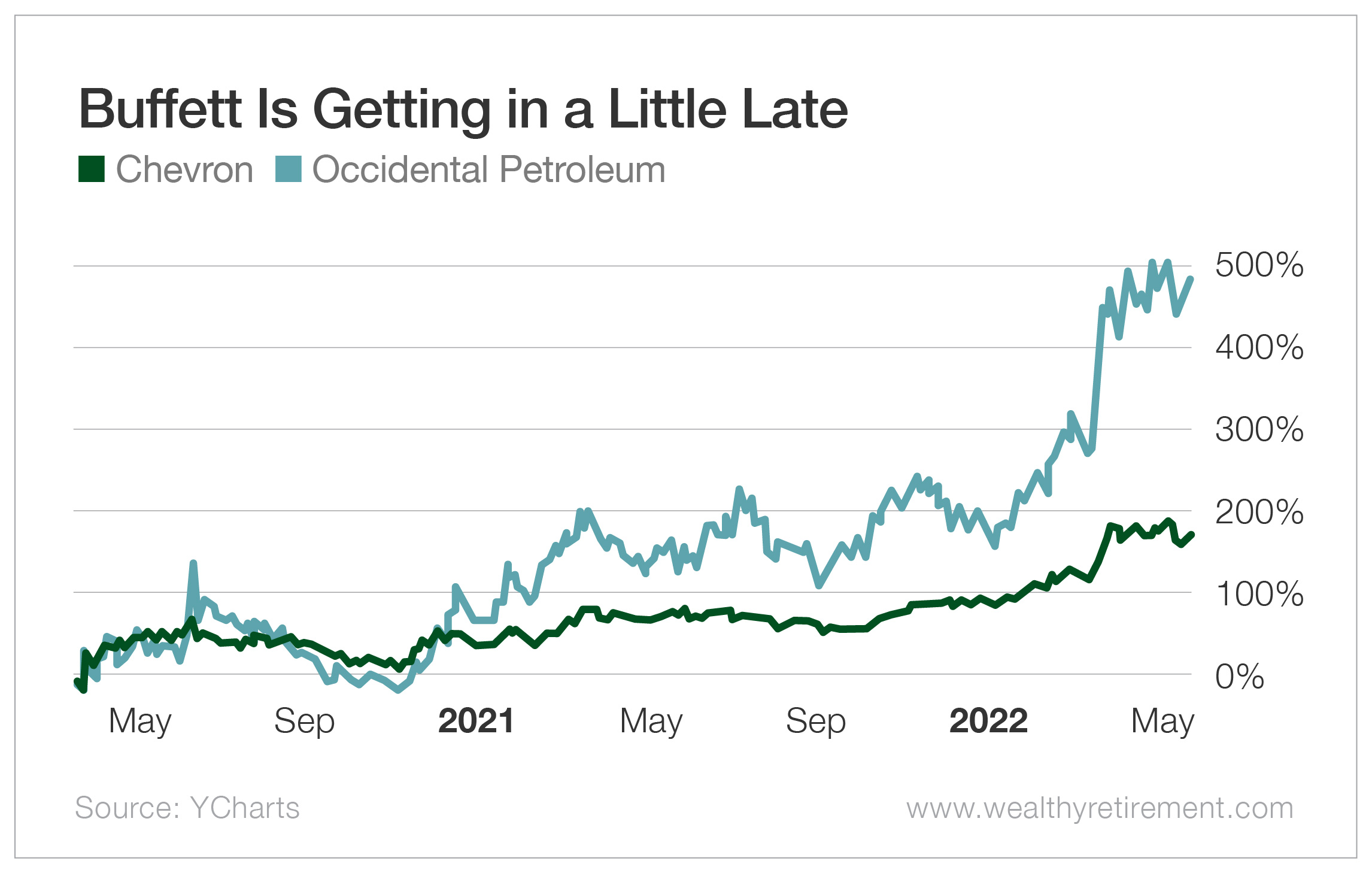 It’s uncharacteristic of Buffett to get this bullish on the energy sector after it has already had a big run.

This indicates to me that Buffett believes high oil prices are here to stay for the foreseeable future.

Because as a long-term investor, Buffett will be planning to hold these stocks for multiple years.

I can’t say whether the Russian invasion of Ukraine has changed Buffett’s long-term view on oil prices.

But I do know that the best time to buy energy stocks is when they are out of favor.

That’s why I singled out the sector back in November 2020, before it started rising.

Since then, energy stocks have performed seven times better than the S&P 500. 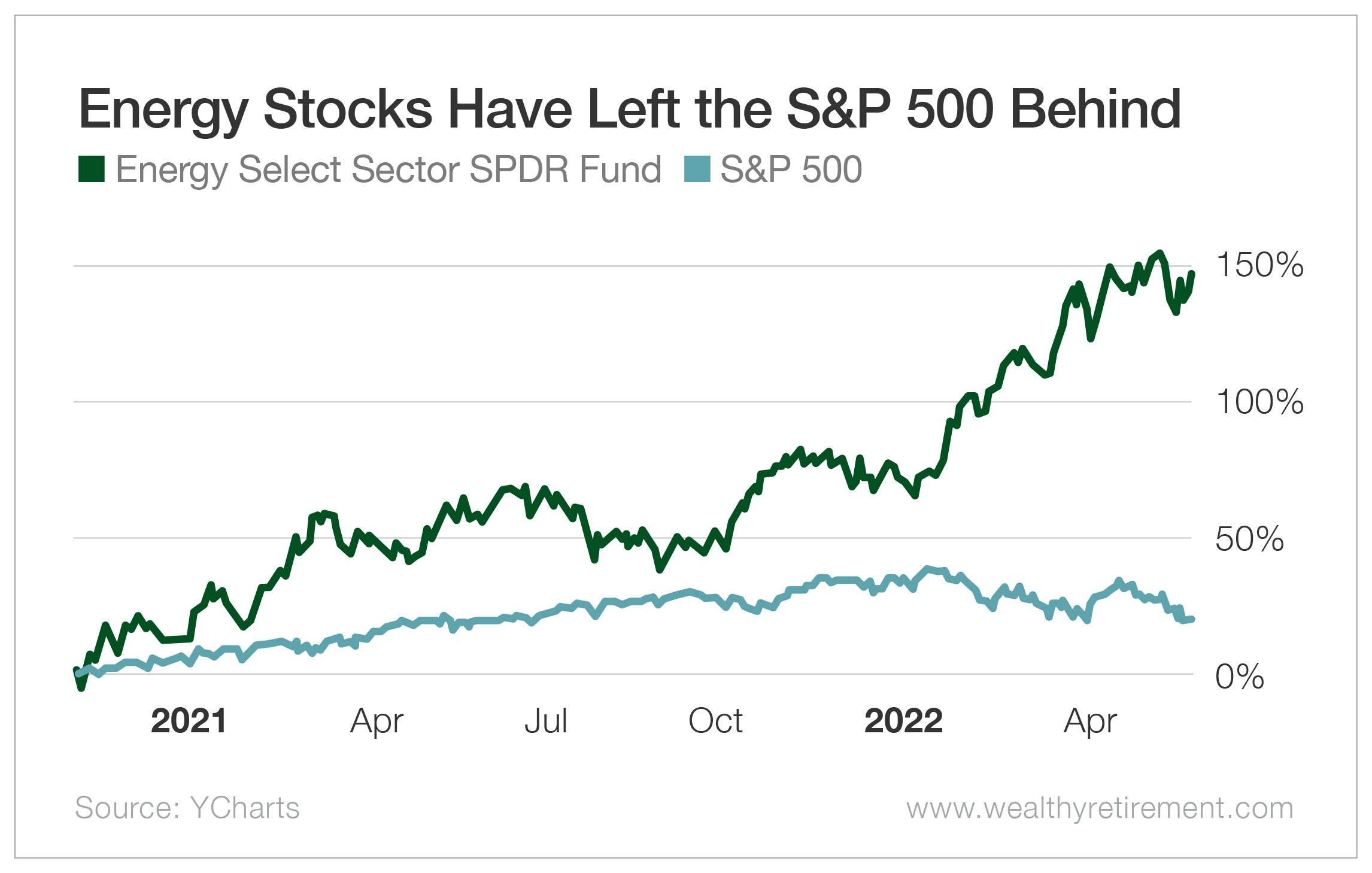 We hit a home run with this call here at Wealthy Retirement.

I’m excited to see how this massive energy investment works out for Buffett.

In the meantime, let’s kick back and enjoy our success on this one.

The Best Stock Prediction of My Career

“The ONE Trade That Had My Hands Trembling”

Snapchat Is Booming, yet Early Investors Are Suffering

Why You Need a Little Real Estate

A Tremendous Bargain From the Natural Gas Industry

Let’s Put This Bear Market to the Test