This has presented one of the best opportunities in the market today.

In fact, I daresay that this is one of the rare exceptional opportunities for stock market investors right now.

While the S&P 500 is up more than 13% since February 18, the KraneShares CSI China Internet ETF (NYSE: KWEB) has since been cut in half. 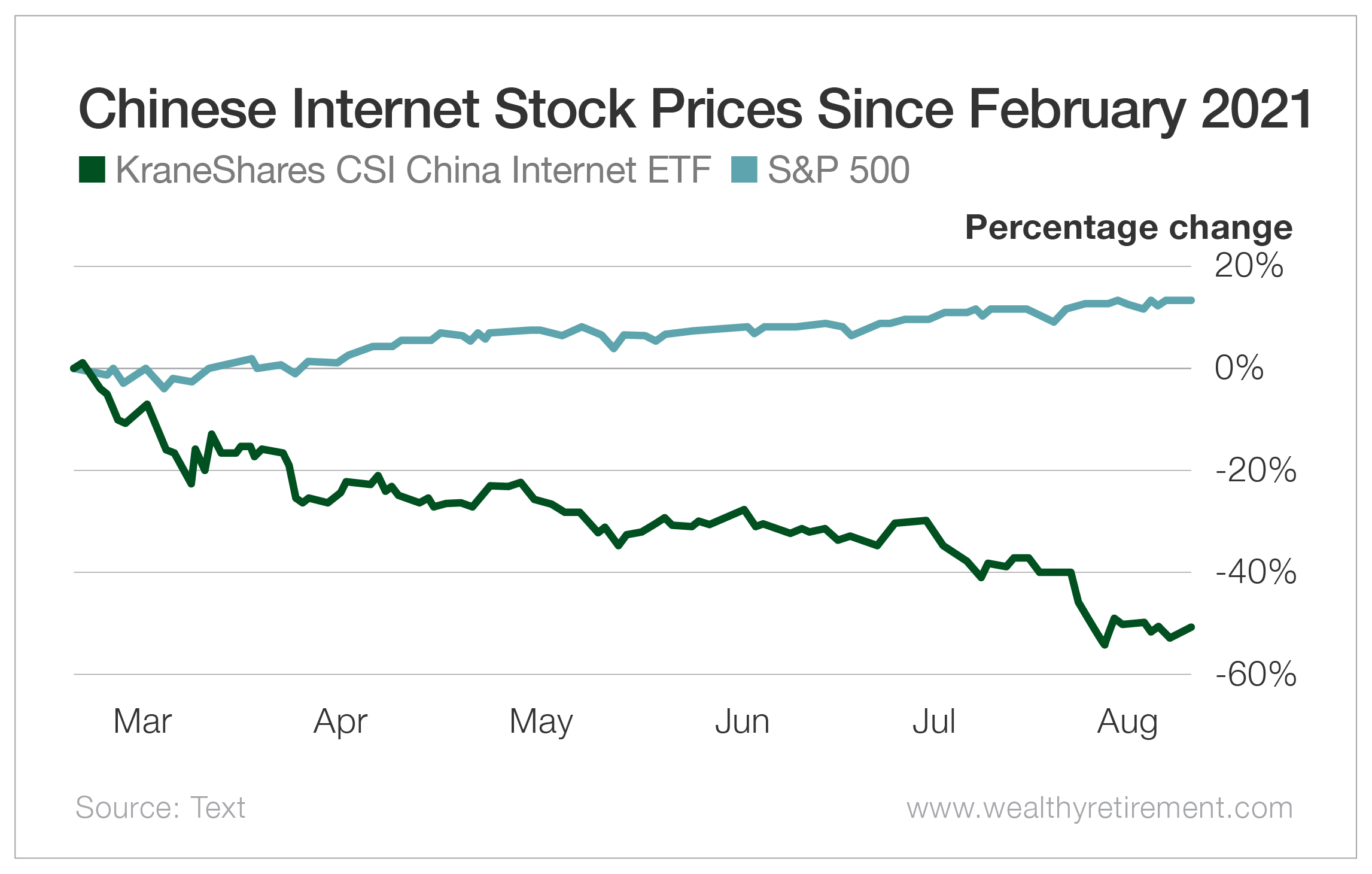 For this exchange-traded fund (ETF) to get back to where it traded just six months ago, this entire group of stocks would need to double. The companies in this ETF are big, growing fast and very profitable businesses.

These companies are the dominant internet businesses in the world’s most populous country, which also brags one of the fastest-growing e-commerce markets in the world.

Some of the largest holdings of the ETF include…

These are world-class companies with incredible growth potential.

Essentially, the companies in the ETF are the Chinese versions of Alphabet‘s (Nasdaq: GOOGL) Google, Facebook (Nasdaq: FB), eBay (Nasdaq: EBAY), Amazon (Nasdaq: AMZN), etc., which have led the S&P 500 over the past decade.

Given the massive population of China, the potential of these Chinese internet stocks is actually bigger than that of megacap America-based companies.

The Chinese internet population has currently reached 854 million people, which is a market penetration of only 61.2%.

Comparatively, the U.S. internet population reached 294 million people, which is a much higher penetration rate of 89.5%.

For investors, the cherry on top of Chinese internet stocks is that the valuations of these Chinese companies are much lower than those of their American counterparts.

That is unusual. These Chinese internet giants have usually traded at a premium. 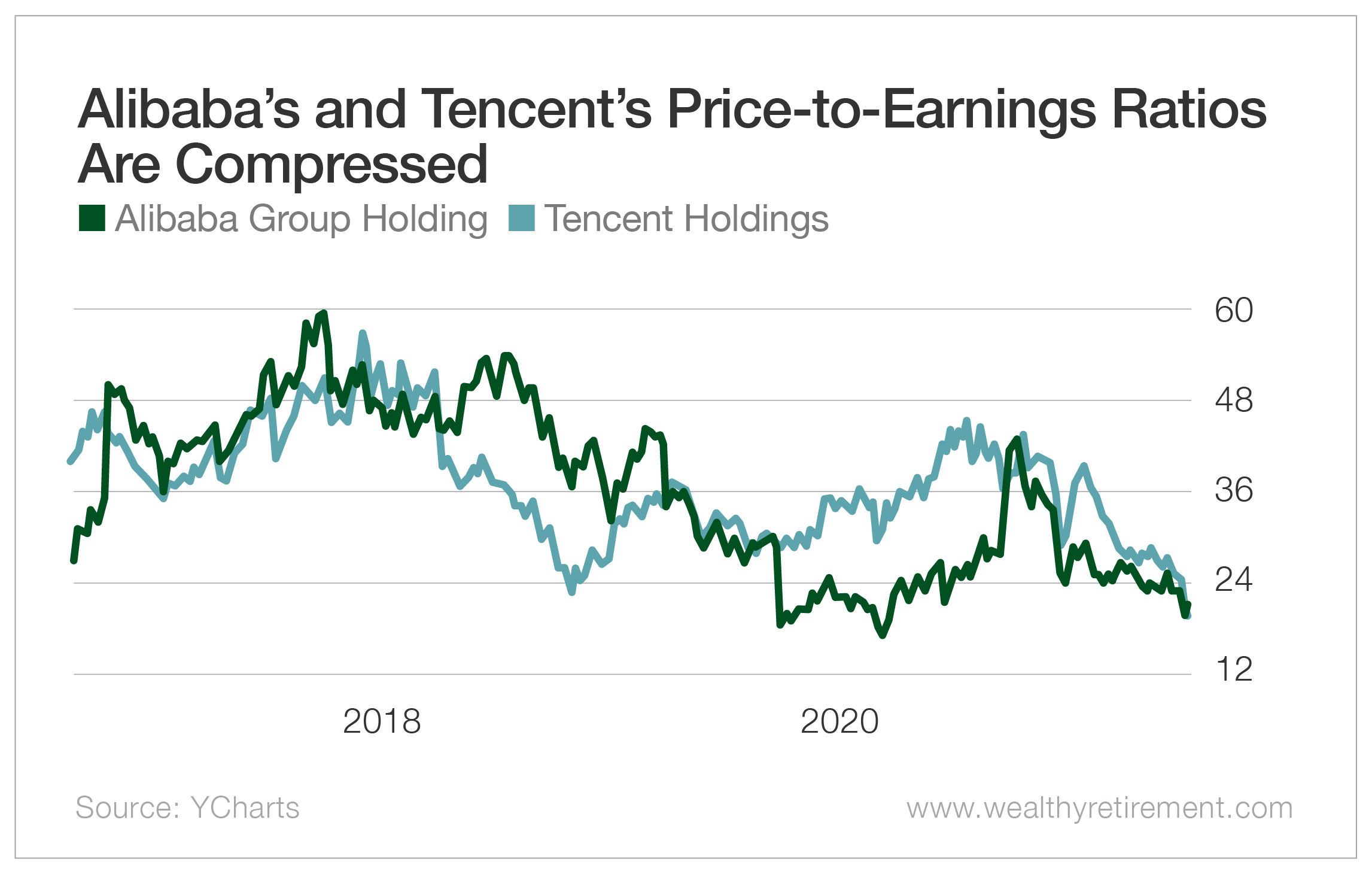 With the sell-off in recent months, price-to-earnings ratios on these Chinese stocks are now half their historical norms.

The only time I can think of when these companies were this cheap was back in 2013.

How can such dominant, cash-rich, fast-growing companies be so cheap?

The answer – as is often the case when great opportunities arise in the stock market – is uncertainty.

The stock market hates it.

Investors today are uncertain about what the Chinese government’s intentions are for these world-class businesses.

For almost a year now, Chinese authorities have been passing directives and regulations against the most powerful Chinese internet players.

The stock market has reacted as though the Chinese government is going to kill these companies.

I don’t believe that to be the case.

My opinion is that the Chinese government wants to regulate the sector to enhance privacy and security, eliminate constraints on the growth of small and medium-sized enterprises, and ensure social equity.

But I am saying that China’s crackdown won’t fundamentally change the future of these great companies all that much.

These businesses are outstanding, with bright growth prospects and attractive long-term margins.

That makes this a rare buying opportunity in an investment world that currently offers very few of them.

When it comes to Chinese internet stocks, it’s time to get a little greedy when everyone else is fearful.

The Best Investment… Ever