Why Pershing Square Holdings Still Has Room Left to Run

It isn’t often that you can be up 100% in one year on a stock and still have plenty of upside left to go.

But that is where Pershing Square Holdings (OTC: PSHZF) sits…

Since March 2020 when I called attention to it, its shares have had a one-way ride straight up! 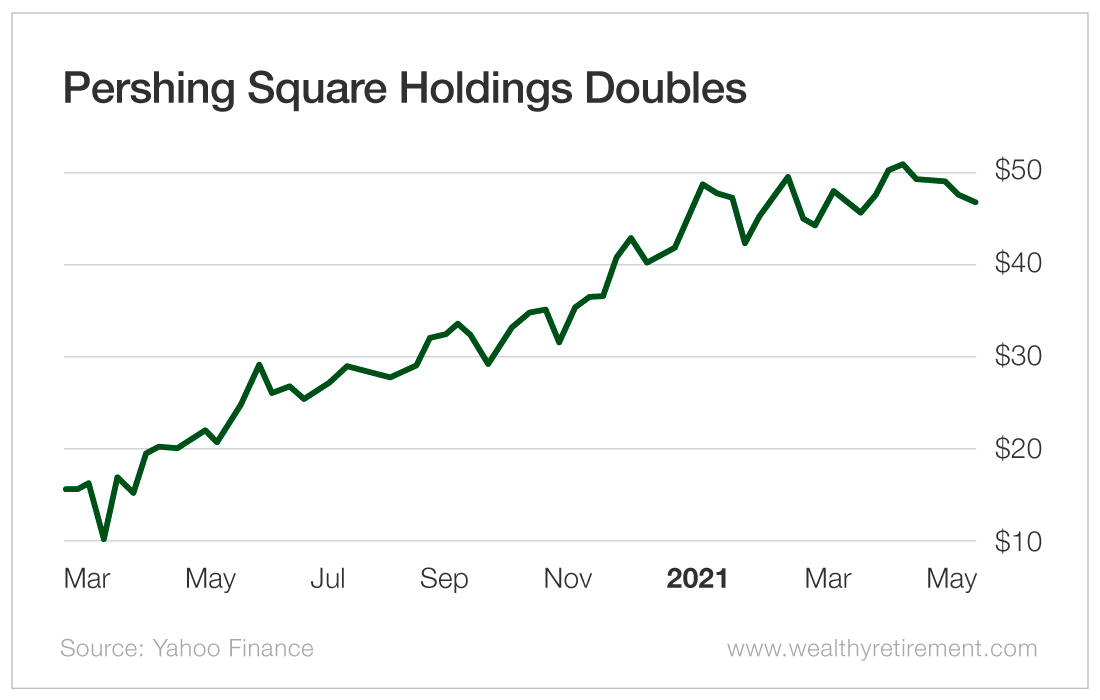 At the time, Pershing Square Holdings shares were just $18, while the value of its portfolio was $28 per share.

That meant by buying Pershing Square Holdings, investors were able to purchase a portfolio of great companies for just $0.64 on the dollar.

That was a bargain!

Incredibly, that bargain existed despite the fact that Pershing’s investment manager, Bill Ackman, had just turned a $27 million investment into $2.1 billion for the fund in less than a month!

Ackman’s trade has to be considered one of the greatest investments in the history of mankind.

100% Higher and Still a Bargain One Year Later

While Pershing Square Holdings’ share price has increased from $18 to around $36 over the past year, the value of the stocks that it owns has increased just as fast.

Today, the value of the stocks that Pershing Square Holdings owns sits at $48.78.

With Pershing’s $36 trading price, that means its shares are trading at a bargain – just $0.73 on the dollar.

And it is especially attractive when you consider that you are paying $0.73 on the dollar to let Bill Ackman manage your money for you.

Ackman not only turned $27 million into $2.1 billion in just a few weeks last year but also built an exceptional track record over the long term, delivering 1,330% compared with the S&P 500’s 377%. 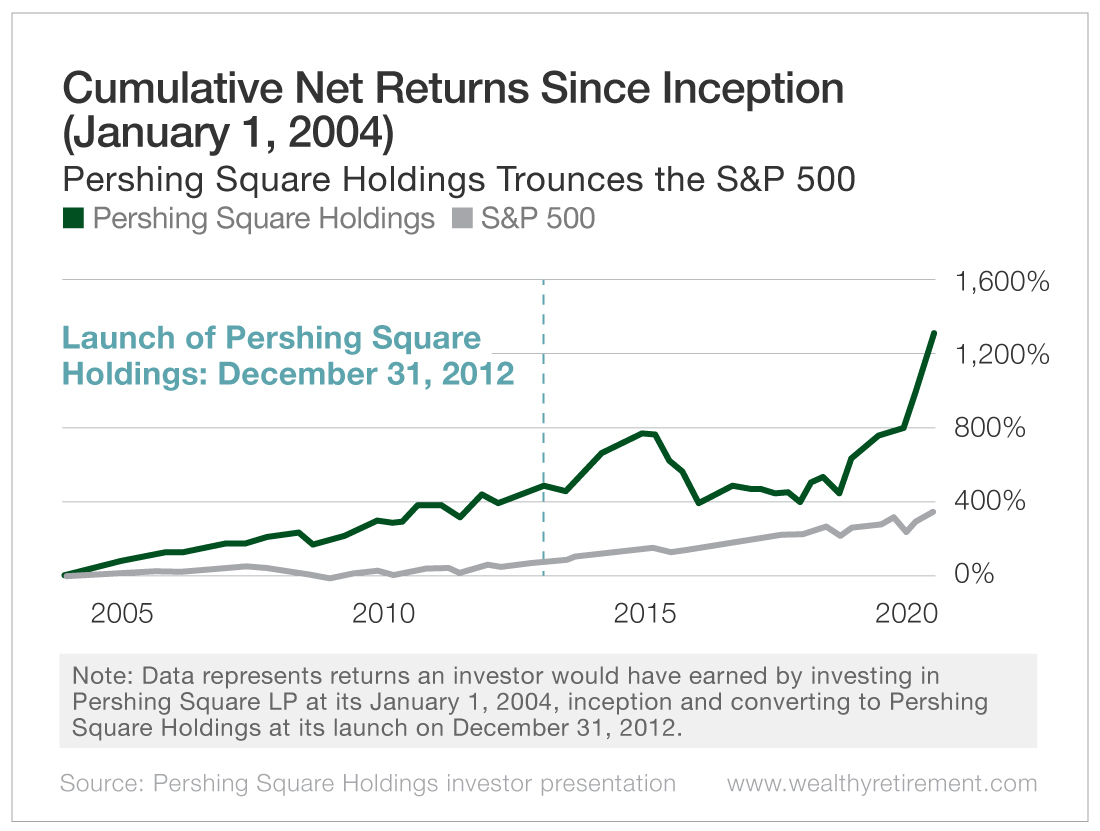 To be able to do it for $0.73 on the dollar is truly a unique opportunity.

For some background on what a SPAC is, you can revisit what I wrote about them last fall. SPACs are known as “blank-check” companies founded with cash (and no operations) that go looking to make an acquisition.

Ackman’s SPAC is the largest one in history and has very high investor interest.

Unlike Pershing Square Holdings, which trades at a big discount, Ackman’s SPAC trades at a 16% premium to the value of its assets (which are currently all cash).

Pershing Square Holdings has the opportunity to invest more than $1 billion in any deal that Ackman’s SPAC completes and also receive warrants in the SPAC that could be extremely valuable if it completes a merger.

But I’d be more than happy to own it through Pershing Square Holdings, where I can get a free ride on warrants, which could turn out to be very valuable.

If Ackman’s SPAC completes a deal, it could bring more investor interest to Pershing Square Holdings.

With the current discounted share price, the exposure to the SPAC and Ackman’s long-term track record, Pershing Square Holdings is the same no-brainer investment opportunity it was last March.

It isn’t often you can say that for a stock that has already doubled in a year!

Can This 9.5% Yielder Withstand a Fall in Cash Flow?