There’s a terrific joke that sums up the oil business.

An oil prospector dies and appears at the pearly gates of heaven.

St. Peter is waiting there to deliver the prospector some good news… and some bad news.

The good news is that the oil prospector is qualified for admission to heaven.

The bad news is that the section in heaven reserved for oil prospectors is packed, and there is no way for St. Peter to fit him in.

After a moment, the oil prospector asks St. Peter if he can say just four words to the other prospectors occupying his heavenly space.

St. Peter gives him the go-ahead.

With that, the oil prospector yells, “Oil discovered in hell!”

Immediately, all of the oil prospectors go rushing out of heaven and head directly to the underworld, where this oil has apparently been discovered.

Impressed, St. Peter invites the prospector to head on into heaven and make himself at home.

The prospector then thinks for a moment and says, “Thanks, but I think I’ll go along with the rest of the boys in case there’s some truth to that rumor about oil being discovered.”

To fully appreciate the joke, you need to understand the history of U.S. shale oil producers…

The Road to Discipline

The American oil industry cracked the code on shale and found a major new source of oil production. It was salvation for the world’s energy prices.

Without the arrival of shale oil more than a decade ago, we would’ve been living in a world in desperate need of oil.

But despite developing a crucial source of oil production for the world, the shale oil producers have been a disaster for shareholders.

These companies focused on growing production as fast as possible.

They spent, spent and spent some more in search of growth.

But what they forgot to focus on was actually making money and generating cash flow for shareholders.

The accounting firm Deloitte did a study of the shale industry early in 2020 to recap the first 15 years of shale oil production.

According to Deloitte, in the brief history of shale oil production, the industry has burned through $300 billion in cash, has been forced to write off $450 billion worth of assets and has experienced 190 bankruptcies!

Despite creating an incredible new source of oil for the world, the industry was an unmitigated disaster through 2020.

But now something has changed…

Not just with shale producers, but with the entire oil and gas industry…

Wall Street, large investors and shareholders of oil producers are no longer impressed by growth.

Why this wasn’t the focus of this industry all along, I’ll never know.

What I do know is that the oil and gas industry is listening now.

The chart below from the Energy Information Administration compares cash inflows and outflows for 47 large U.S. oil producers starting in 2016.

The green line in the graph represents capital expenditures, or cash outflows, and the teal line represents cash from operations. 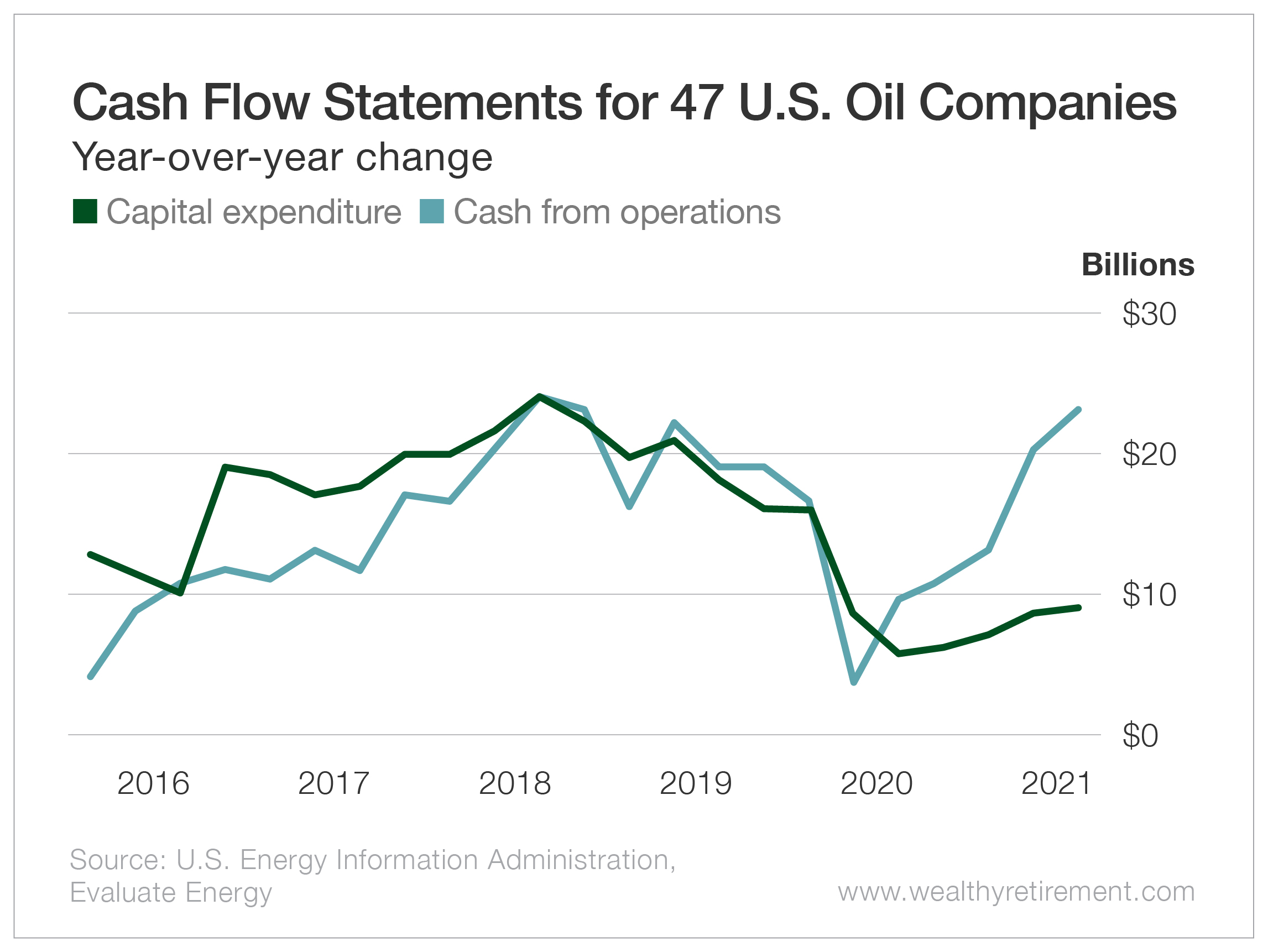 In the second half of 2020, the oil and gas industry clearly found some spending discipline.

Cash from operations started exceeding capital expenditures midway through 2020, and the margin between the two has since grown steadily wider.

Instead of consuming cash, American oil producers are now generating billions and billions of dollars of free cash flow.

After being a terrible place for investors for years, these free cash flow-generating oil companies now look very appealing.

And the industry’s new spending discipline is reducing oil supply across the board. That’s bullish for oil prices over the medium term.

Better still, the valuations on these producers are extremely cheap.

My favorite play in this sector is still Cenovus Energy (NYSE: CVE), which trades at a 25%-plus free cash flow yield at current oil prices.

Cenovus has beaten the market since I first brought it to your attention at the start of October, but there’s plenty of room for this one to run. 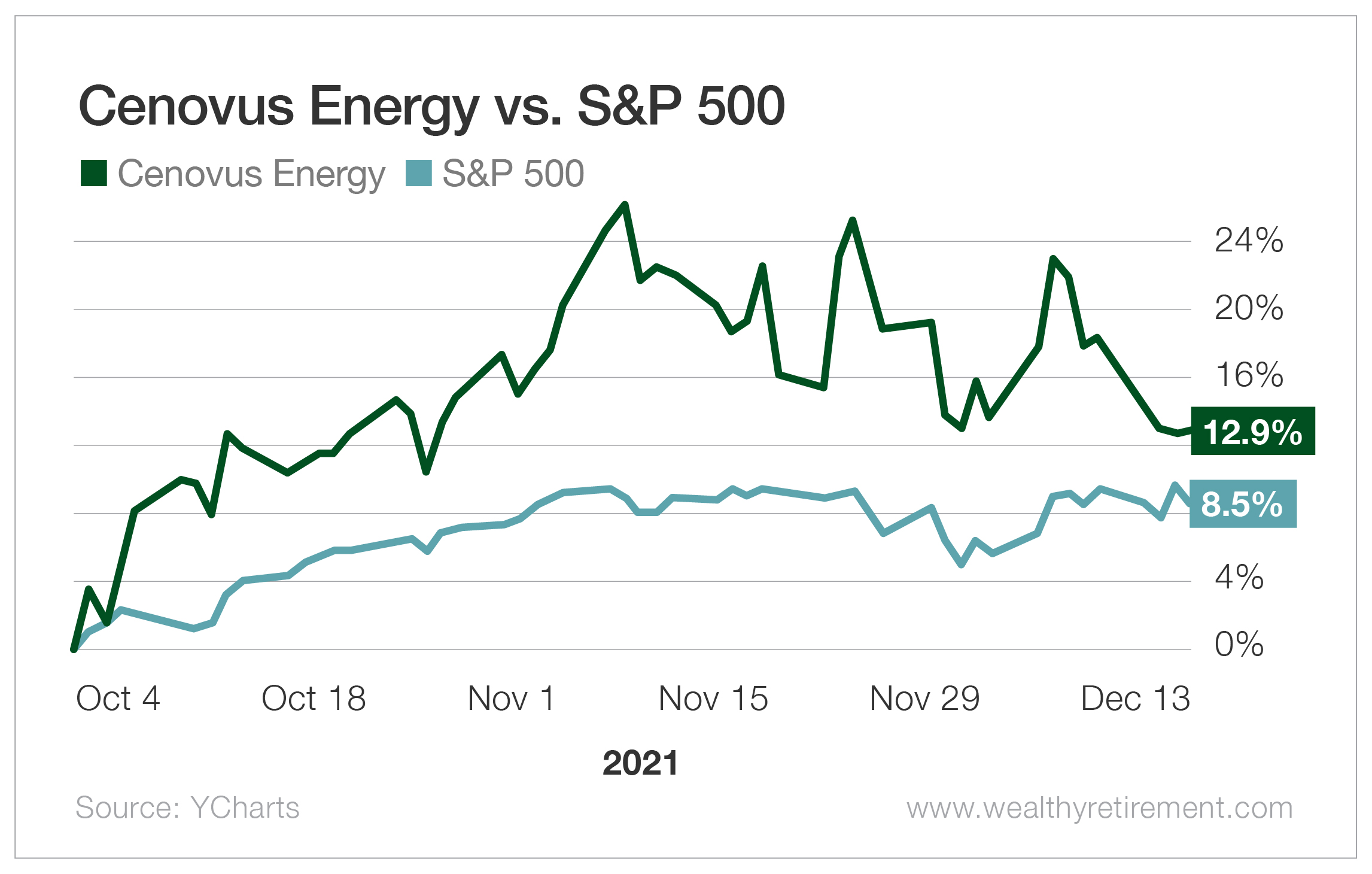 I believe those who buy Cenovus at the current share price are going to do extremely well over the next two to five years.

A Three-Ingredient Cure for Rising Inflation