When bubbles pop, wealth disappears very quickly. I’ve seen this happen multiple times during my time as an investor.

The dot-com bubble popped in 2000. Investors holding profitless internet stocks were wiped out.

The housing bubble popped in 2008. People lost big in both the housing and stock markets.

Now big technology stocks have had an incredible run in 2020 despite the COVID-19 pandemic.

With that big run, there has been talk of a “bubble” forming in the tech sector.

To find out the truth, let’s crunch some numbers on one of our favorites…

A couple of weeks ago, I had some nerve…

I suggested that Warren Buffett lock in the massive $120 billion profit he had scored by betting big on shares of Apple (Nasdaq: AAPL).

Since I made the suggestion, share prices of tech sector stocks have been incredibly volatile. I remain convinced that Buffett should lock in his Apple gains. Apple’s valuation has gotten extremely rich…

While I love Apple’s business and incredible balance sheet, the stock is too expensive.

That sounds like the value of an entire country, not one company.

For perspective, consider this…

Apple by itself is now worth as much as the combined market valuations of every single stock in the FTSE 100 Index. The FTSE 100 represents the 100 largest publicly traded companies in the United Kingdom.

But the market believes that Apple is worth as much as all of them combined.

Apple Could Get Cut in Half on Valuation Compression Alone

Apple’s market valuation doesn’t reflect how the business is performing.

Instead, it reflects whatever valuation multiple the market is willing to assign to its earnings.

So for me, the chart below is a very clear warning signal. 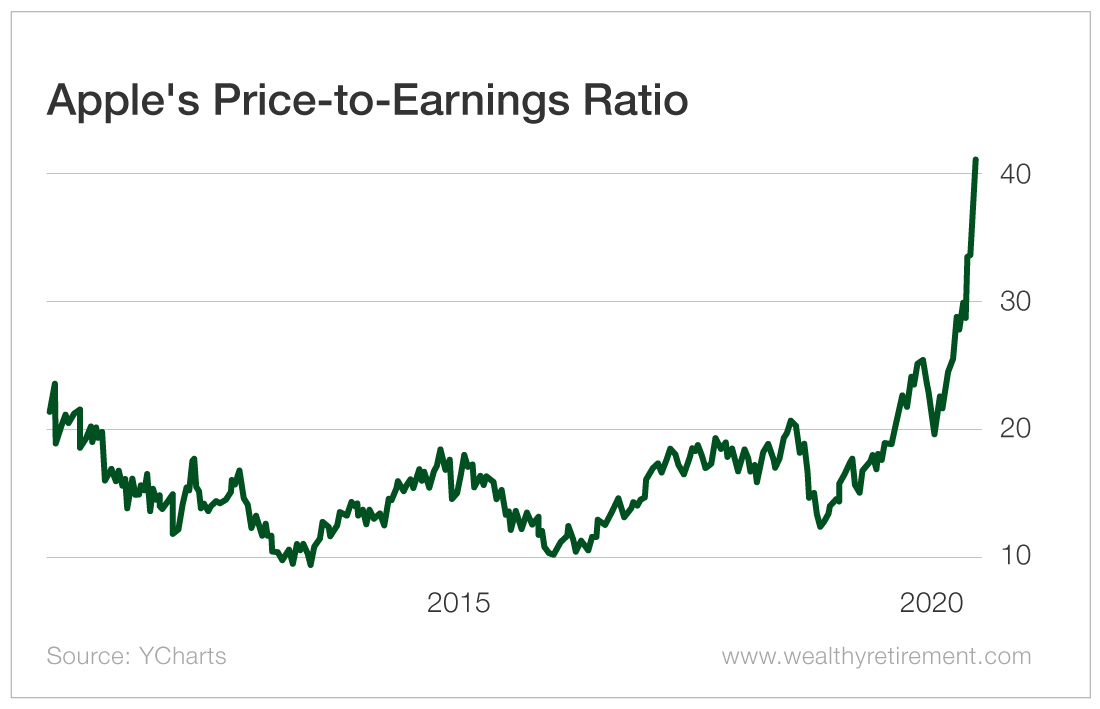 Over the past 10 years, Apple’s valuation has bounced between 10 and 20 times trailing earnings. Today, the company trades for almost 40 times earnings.

If Apple’s valuation were to return to 20 times earnings (the high valuation point of the past decade), its stock price would get cut in half.

If the valuation were to drop back to 10 times earnings, Apple’s share price would fall by 75%.

So investors really need to ask themselves this: Has anything really changed with Apple’s business that would justify its earnings valuation jumping from between 10 and 20 times earnings to 40 times earnings?

I believe that the more appropriate valuation for Apple is much closer to 20 times earnings. A 40 times earnings multiple is appropriate only for smaller growth stocks that can grow at high rates for years to come. Apple is simply too big to grow that rapidly from here.

As a result, I believe that there is a lot more downside in Apple’s shares today than there is upside. Its valuation is getting a little bubbly…

A Huge Opportunity in Real Estate