Take Advantage of the SPAC Crash

Joseph Kennedy, President John F. Kennedy’s father, famously told a story about a shoeshine boy that has kept me out of a lot of financial trouble over the years.

In the winter of 1928, Joe decided to have his shoes shined before work.

As the shoeshine boy was finishing, he looked up at Joe and offered him a stock tip: “Buy shares of Hindenburg.”

Joe promptly returned to his office and liquidated his stock portfolio.

As Joe later put it, “When the shoeshine boy starts handing out stock tips, you know it is time to get out of the market.”

Joe was able to use the withdrawn cash that he was sitting on to buy stocks at a fraction of the price that he had sold them for just months earlier.

He created a fortune that has lasted for generations and reshaped the country.

In October 2020, I warned that investors needed to stay far away from the latest “shoeshine boy” trade in the market.

At that time, investors had gone wild for special purpose acquisition companies (SPACs).

They are formed strictly for the purpose of raising cash through an initial public offering (IPO).

That means SPACs raise cash but have no actual operations.

Once a SPAC goes public, it has a limited amount of time to use its cash to purchase a business. Usually, the time period is 12 to 24 months. If no acquisition is made, the cash is returned to shareholders.

SPACs have been around for decades, but in 2020, their popularity went parabolic.

Seemingly everyone was attached to a SPAC.

Certainly, lots of people with no business qualifications…

And former politician Paul Ryan, to name a few.

This was a ridiculous anomaly in the market, yet investors were buying SPACs at a fast and furious rate.

Prices of SPACs rose to absurd prices – far in excess of the cash that these blank-check companies with no business operations held on their balance sheets.

I’m sure the shoeshine boys were recommending SPACs to their patrons.

Wall Street kept shoveling SPAC after SPAC out the door.

When it comes to choosing between quality and investment banking fees, you know you can always count on Wall Street to choose the latter.

Investors were spoon-fed countless SPACs that were destined to perform poorly.

The SPAC sector was caught in a bubble that would inevitably end badly.

Which is exactly what happened. 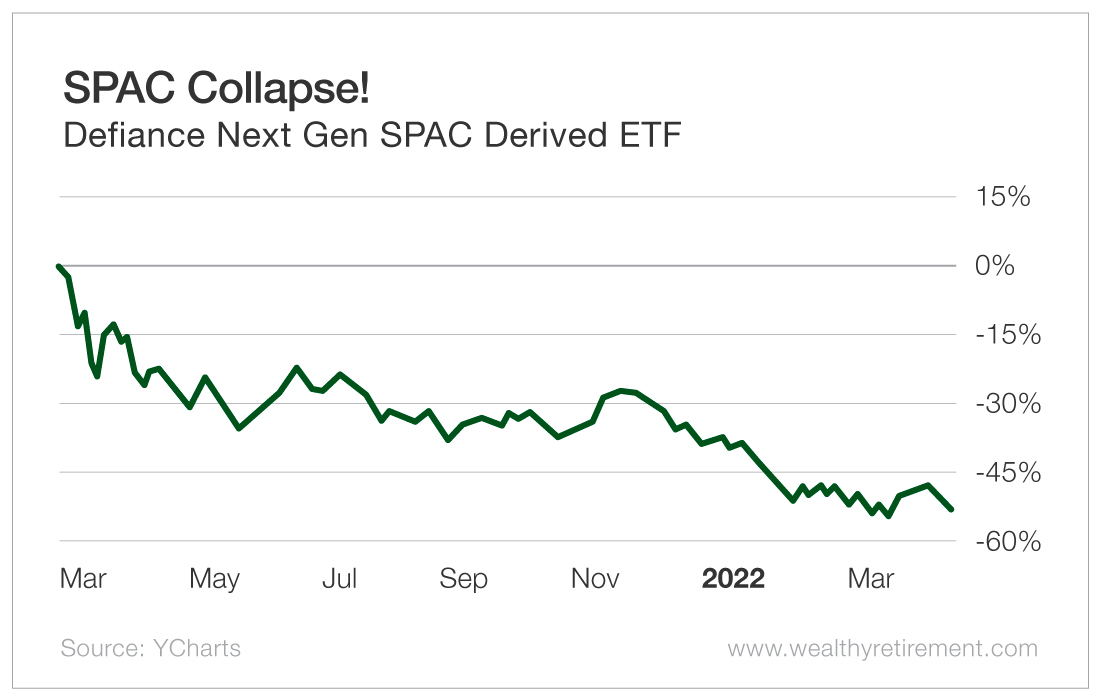 The SPAC sector has been cut in half since it peaked in February 2021.

As often happens, chasing a hot sector turned out to be a terrible investing decision…

Investors who hungrily bought SPACs in 2020 and early 2021 got burned for chasing the flavor of the day.

Valuation and quality matter when buying stocks, and so many SPACs were overpriced and of low quality.

Now that the SPAC bubble has burst, nobody wants to own these stocks.

This is great news for us.

There are now opportunities to find deeply undervalued stocks in these once-popular SPACs.

The founder and CEO of hedge fund Third Point, Dan Loeb, believes that he has identified one such opportunity.

Third Point just registered a filing with the Securities and Exchange Commission that indicates Loeb’s firm has taken a significant stake in Cano Health (NYSE: CANO).

Cano Health, like so many other SPACs on the hunt and SPACs with completed deals, has seen its stock price get demolished as investors have fled the sector. 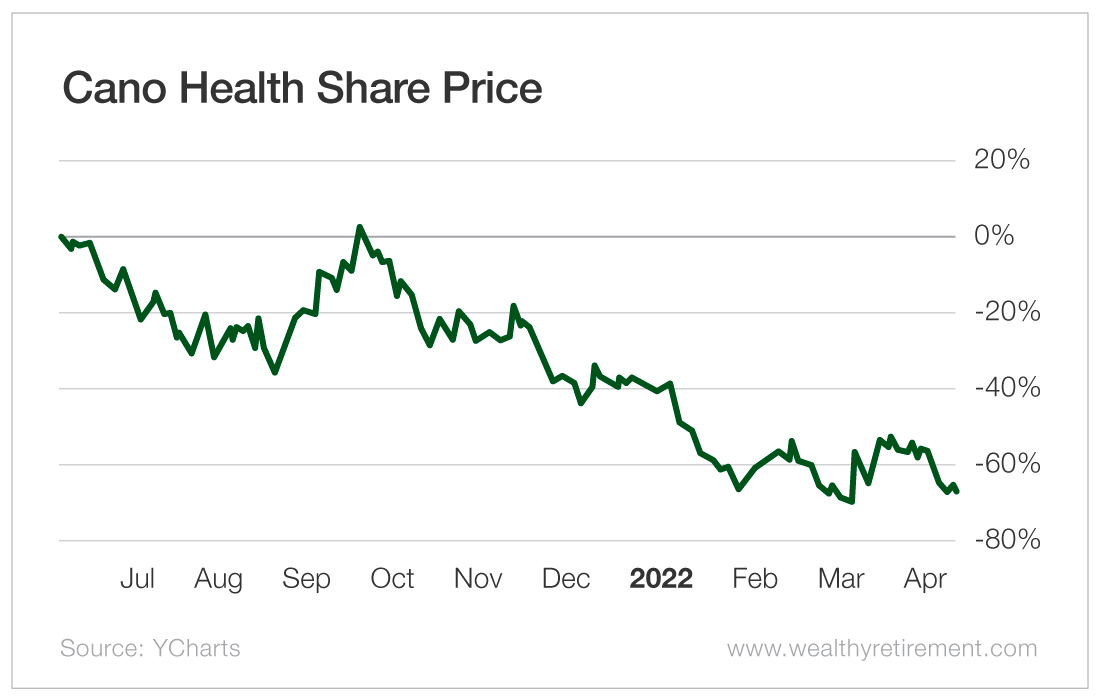 Today’s Cano Health is the product of a 2020 merger between the Cano Health, an existing healthcare services business, and a SPAC called Jaws Acquisition Corp.

The merger allowed the company to quickly expand its services by acquiring clinics and treatment centers across the country.

In his filing, Loeb acknowledges that the market now has a “largely unfavorable” view of companies taken public through SPACs.

He also goes on to say that he believes Cano Health is trading at a substantial discount to what the company is actually worth.

To remedy this undervaluation, Loeb believes that Cano’s board of directors should put the company up for sale.

That way, shareholders can get cashed out at a fair valuation, which is a big premium to Cano’s current share price.

Why do I care what Loeb says?

I care about what he says because over the past 25 years at Third Point, Loeb has smashed the market.

Third Point has generated 15% annualized returns for his investors after deducting his hedge fund fees.

We avoided the SPAC bubble, and now Dan Loeb is pointing us to a specific opportunity to take advantage of the SPAC crash.

Loeb’s advice is a lot better than a tip from a shoeshine boy!

Discover the Next Trillion-Dollar Opportunity