Before I started working at Wealthy Retirement‘s publisher, The Oxford Club, I knew some of the basics of finance.

I’ve always been good at sticking to a budget and hypercautious about taking on debt. Prior to starting at the Club, I was taking full advantage of employer 401(k) matching and was aggressively paying down my student loans.

In other words, I considered myself pretty savvy in terms of personal finance.

But within a year of joining The Oxford Club, I heard a presentation about optimizing your 401(k) by then-Editorial Director Andy Snyder (now the founder of Manward Press) that humbled me…

And it opened my eyes to the incredible wealth-building power of The Oxford Club.

You see, just one takeaway from that presentation could end up generating at least an extra $300,000 for me by the time I retire.

Here’s what I learned…

Many brokerages bury expense ratios on their funds, making it difficult to tell exactly what you’re losing in management fees.

Target-date funds may be convenient, but there’s a cost for that convenience.

While that may not seem high, according to TD Ameritrade, the average all-in cost of management fees is 0.45%.

So I switched from a target-date fund into lower-cost funds that still satisfied my ideal asset allocation model based on my time horizon and risk tolerance.

By year 19 with the target-date fund, we’d have paid more in management fees than our initial investment. 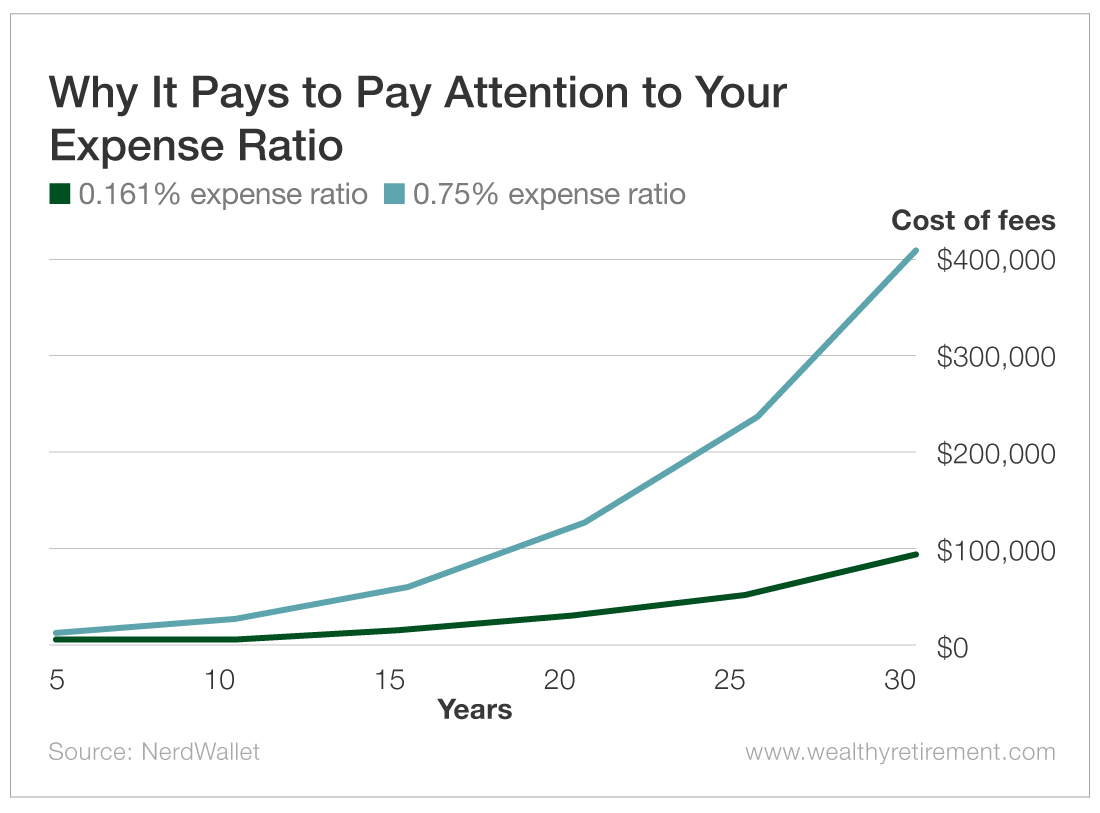 And before you think, “Well, Rachel, I don’t have 30 years before I retire”…

Consider this: After just five years, the lower-fee 401(k) would save $5,842 in fees compared with a target-date fund.

That’s enough for a 12-night cruise for two through the Greek islands!

While it’s worth checking your brokerage’s policy on contribution changes to look for any hidden fees, I made this switch to my own 401(k) for free.

And by the time I retire, that one adjustment could amount to as much as an extra $311,166 in my account.

Admittedly, there’s a bit more oversight involved in my lower-fee 401(k) than in the target-date fund. Specifically, I have to remember to rebalance my portfolio once a year, and I typically do it around the holidays each year so I don’t forget.

While I like to consider myself independent and financially savvy, I’m not sure I’d have made this switch (or at least made it as soon as I did) without The Oxford Club.

And all this happened within my first year of working here…

I’m now going on seven years of having access to some of the most intelligent and compassionate people in the money business.

Without a doubt, the knowledge I’ve gained here at the Club will add a few million dollars to my net worth by the time I retire.

And the best part is, I haven’t benefited from any secret “insider” information…

I’m sure that you too have picked up your fair share of money-generating ideas from Wealthy Retirement.

I’d love to hear about them and how much you think they’ll add to your bottom line. Feel free to share in the comments below. I look forward to hearing from you.

How the “Next Great Electric Automaker” Ran Out of Gas

We’ve Entered a Bear Market: Are You Ready?

The Most Impressive Man I’ve Ever Met

The Answer to Market Chaos