A few years ago, I was speaking with a fairly new investment advisor who knew that I follow the world’s top fund managers.

This fellow was itching to make a lot of money in a hurry.

He was new to his job, but he wasn’t young – probably pretty close to 50 years old.

“Which fund manager would you give some money to if you really wanted to make some money?”

I said, “Hmm, well, I’m aware of a couple who have generated double-digit returns for long periods of time – more than two decades.”

He replied, “No, that isn’t what I’m asking. Anyone can do that over the really long term. What I want is a fund manager who is going to make me lots of money really fast.”

The truth, of course, is that generating double-digit returns in the stock market over the long term is extremely hard.

It’s also true that looking to get rich quickly in the stock market is an almost certain recipe for disaster.

If someone tells you that they know how to get rich quickly in the market, they are either lying to you or very inexperienced.

This man was advising people on what to do with their hard-earned money, and he was making a mistake that, unfortunately, the majority of retail investors make.

Take, for example, the experience of retail investors in the top-performing mutual fund of the decade from 2000 to 2010.

The numbers are mind-blowing…

From 2000 to 2010, the CGM Focus Fund generated an 18% annualized rate of return. That is exceptional stuff.

How did the average investor in the CGM Focus Fund do?

Incredibly, the average annualized return for investors in the fund was negative 11%!

The average investor didn’t even make money in the best-performing fund of the decade.

How did this happen?

The answer is simple… It happened because investors were trying to make a lot of money really fast.

The CGM Focus Fund kept a very concentrated portfolio with very few stocks, which made the fund’s performance volatile.

After the fund had a really hot streak, investors would pour money into it.

Then, after the fund predictably went cold for a while, those same investors cashed out.

They chased performance – and as a result, they bought high and sold low…

Everyone Can Get Rich Slowly…

In the end, I told this investment advisor something he didn’t want to hear…

He ended our conversation immediately thereafter.

I told him that making a lot of money in the market isn’t hard.

Trying to get rich quickly in the stock market is a fool’s errand. But anyone can use extreme patience to get rich.

In fact, I recently showed my kids how powerful patience is…

When I graduated high school in 1991 (yikes, 30 years ago!), my wonderful parents bought me a car.

You can call it a perk of being an only child.

I didn’t need the car. I was within walking distance of the university that I was about to go to for the next several years. In 1991, I also could have gotten an older car for a fraction of that $10,000 if I had needed to.

I was and still am very grateful for that car. 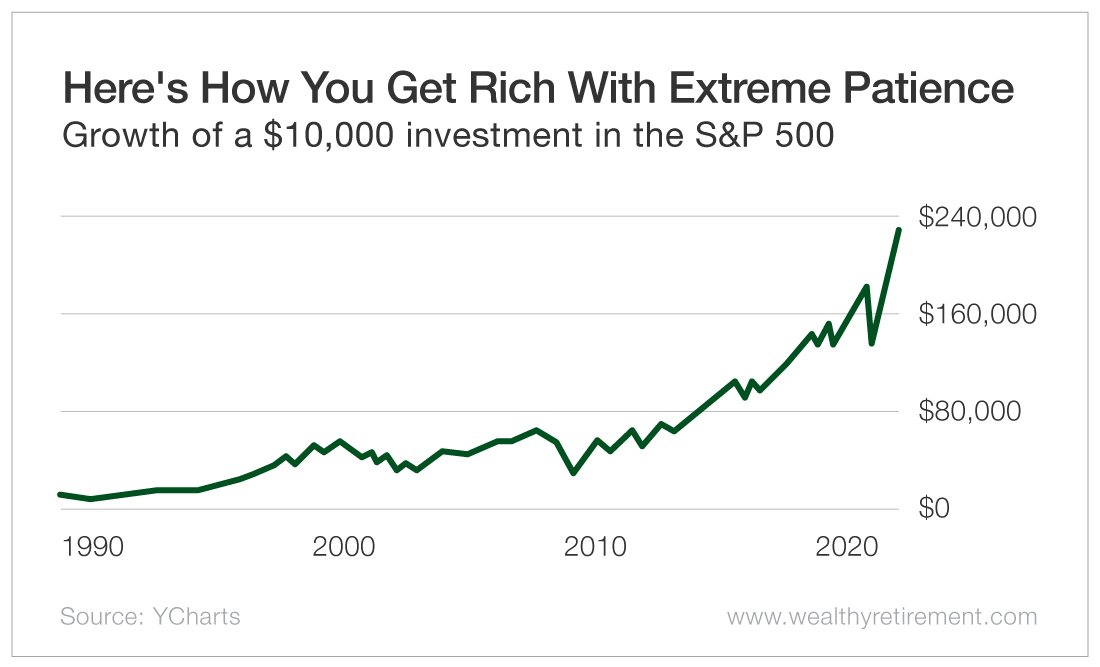 The power of compound interest never fails to amaze!

The good news for me is that in addition to that car, my mother did me another big favor.

When I graduated from high school, she bought me a book called The Wealthy Barber.

That book taught me the power of compound interest and extreme patience.

So unlike the financial planner who was focused only on hitting it big with a quick score, I’ve been using extreme patience and diligently saving for 30 years now.

I’ve made plenty of investing mistakes along the way, and I can tell you that every one has come from me not being patient.

The stock market game is simple. All it takes is patience to win.

Sadly, it is so simple that almost nobody is doing it…

Can This Steel Producer Sustain Its Generous Dividend Hike?

How Safe Is Your Investment Income?