This 13.8% Yielder Was Unsafe Last Year… How About Now?

A Note From Chief Income Strategist Marc Lichtenfeld: Before we dive into today’s Safety Net, just a quick note to thank all of our veterans on this Veterans Day. I and everyone at Wealthy Retirement are deeply appreciative for all you have done. Thank you.

And now on to Safety Net…

A little more than a year ago, my colleague Kristin Orman wrote that the distribution of Global Partners (NYSE: GLP), a large owner of gas stations in the Northeast, could be in trouble if oil prices fell. At the time, the distribution’s safety was rated “D” – at a high risk of being cut.

(Global Partners is a partnership, so it pays a distribution instead of a dividend.)

Kristin was right. Global Partners cut its distribution by 25% in April. But since then, it has raised the distribution twice – almost back to the level where it was before it was reduced.

Now that Global Partners’ distribution is back to $0.50 per share quarterly, which comes out to $2 on an annual basis or 13.8% per year, can the company maintain that double-digit payout or do shareholders need to remain wary?

SafetyNet Pro does not like to see declining cash flow. And a 44% drop is particularly bad…

This year, DCF is forecast to rise a little bit, which is certainly good.

It is also encouraging to see that even the lower DCF can still cover the distribution.

Last year, Global Partners generated $95.7 million in DCF. This year, that total is expected to rise to $99.8 million. Meanwhile, the company paid out $76.6 million in distributions last year and is projected to pay $60.2 million this year. So DCF easily covers the distribution.

So should you consider the payout safe? 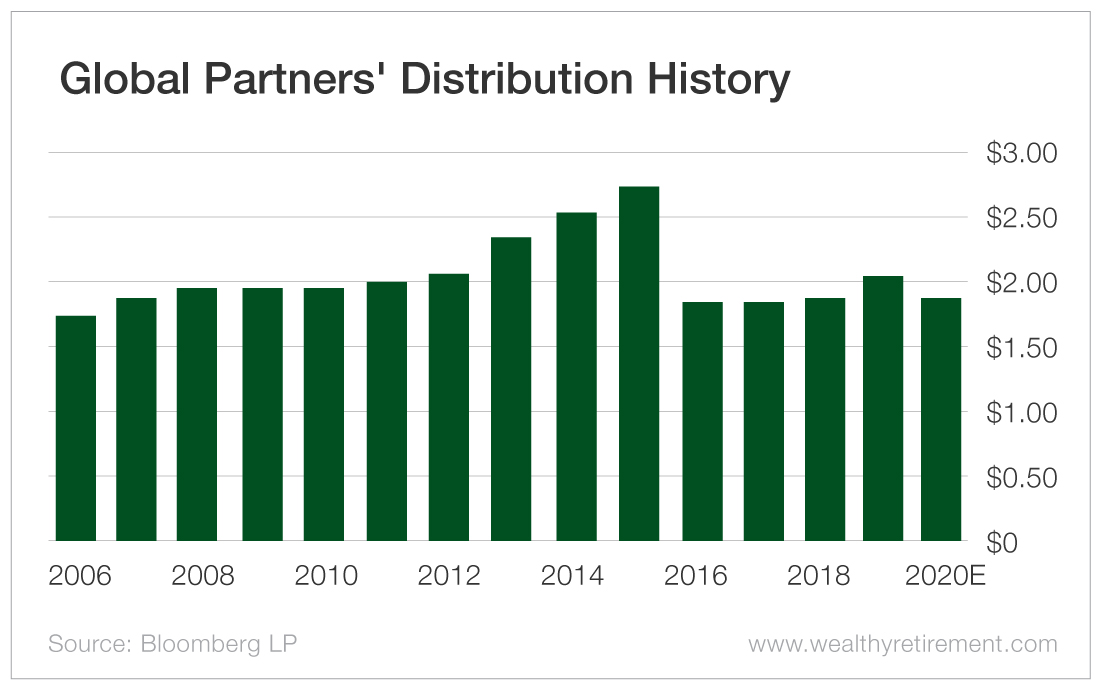 With cuts in 2016 and 2020, it’s clear that management will cut the distribution when necessary. The huge drop in DCF last year also hurts the safety rating.

If Global Partners can boost DCF by a meaningful amount next year, it could get an upgrade. Until then, however, the distribution has to be considered at risk of being cut if DCF slips again.

Why High-Yield Bonds Deserve a Place in Your Portfolio

Is This Biotech’s 4.2% Yield Healthy?