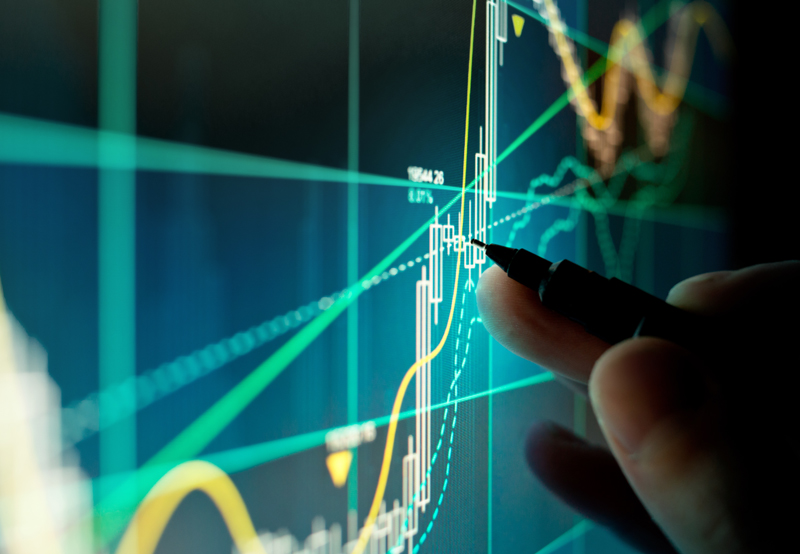 People are looking for more ways to make income in this economy. Many have realized that if they invest in the right dividend-paying stocks, they’ll gain a never-ending stream of money. They’ll be growing their net worth while they sleep.

But there are always exceptions… like the company in this report.

Rather than inflating the bank accounts of overpaid CEOs and directors, this company pays its excess profits back to its shareholders.

Even better, it just raised its dividend, giving it a whopping 10% yield. What’s more, it’s raised this dividend every year since 1998. That puts it in spitting distance of Dividend Aristocrat territory.

Over the past 12 months, this company generated twice as much cash as it pays out in dividends.

That low payout ratio is why I’m confident that although the yield is in the double digits, it’s actually quite safe.

Best of all, this company is in a stable industry that isn’t going anywhere and is set up for incredible growth in the years ahead.

It’s a commodity transportation company – a pipeline operation, primarily – that acts as a toll collector for S&P 500 companies that need to ship their products.

Consider this… Between the pandemic and economic instability, many businesses, like movie theaters, restaurants and retail stores, are being forced to rethink how they operate.

But the one thing people will always need, at least for the foreseeable future, is fuel. Specifically, oil and natural gas.

And while a lot of oil and gas producers have had a rough ride as of late, this company makes money no matter who is selling the stuff. Just like a toll booth attendant, it collects fees to the tune of billions of dollars for transporting fuel through its pipelines.

Furthermore, oil and gas companies, both domestic and foreign, are more than happy to pay the toll. Why? Because building and maintaining their own pipelines would be expensive and inefficient.

But with Enterprise Products Partners (NYSE: EPD), oil and gas companies can deliver their products to Americans across the country at a negligible cost to themselves.

And there’s even more here than meets the eye…

The Gas Must Flow

Founded in 1968 and based in Houston, Texas, Enterprise Products Partners is a premier midstream energy services company.

“Midstream” refers to the fact that the company does not produce oil and gas but stores and transports them to the places where they will be refined. It owns several of the colossal oil and gas pipelines that carry the lifeblood of the modern world.

In all, Enterprise’s portfolio includes more than 5,300 miles of oil pipelines and nearly 20,000 miles of natural gas lines that cross 27 of the 48 contiguous states. On top of that, it has the capacity to store 178.5 million barrels of oil. It also operates a number of ports, processing plants and refineries.

Yes, due to the pandemic, oil and gas consumption are down. But as the economy bounces back, more oil and gas will flow through the company’s pipelines and the prices of those commodities will rise as well.

And while Enterprise Products Partners doesn’t sell oil and gas, their prices affect the company’s stock and the stocks of most master limited partnerships (MLPs) as well.

Because Enterprise is an MLP, its distribution (MLPs pay distributions, not dividends) is tax-deferred because it is considered a return of capital.

Return of capital is not taxed as income. Instead, it lowers your cost basis and increases your capital gains when you sell the stock.

And that distribution is as juicy as an overripe nectarine. Enterprise Products Partners currently pays a quarterly distribution of $0.445 per unit (MLPs are in units, not shares), which comes out to a 10.2% yield on a stock that costs less than $20. Again, that’s a 10.2% tax-deferred yield.

The company has now raised its distribution (dividend) for 21 years in a row. It has raised it 18% over the last five years… 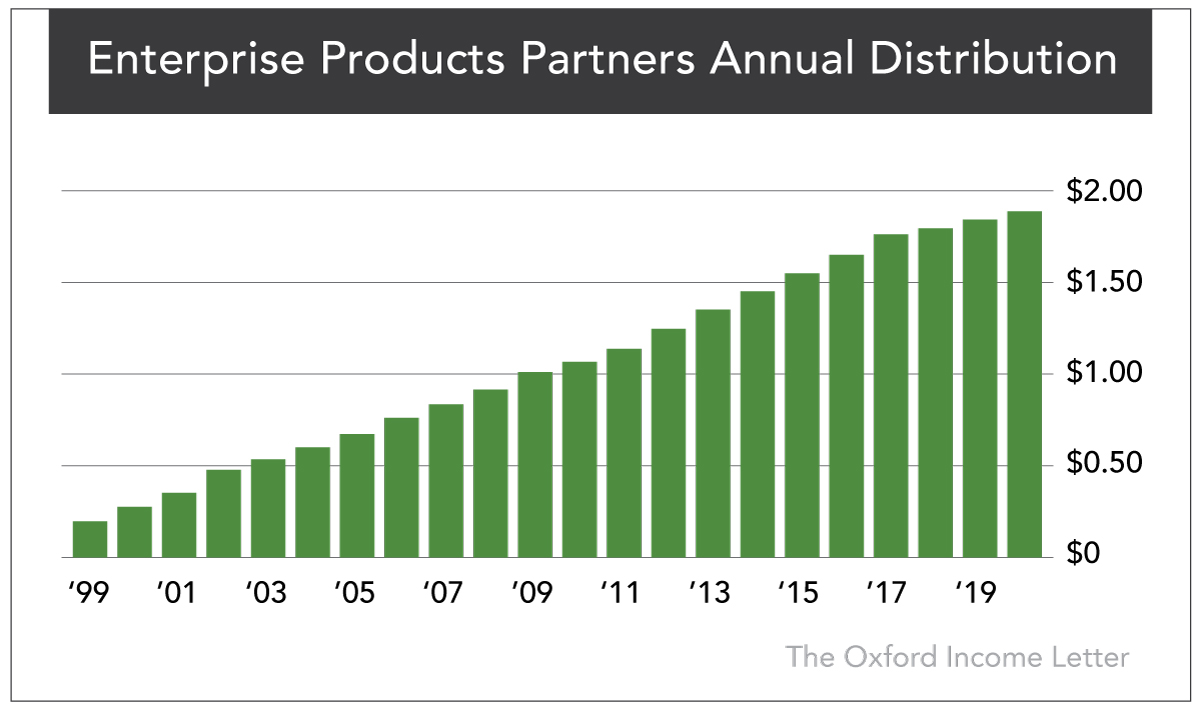 Enterprise’s clients include some serious heavy hitters in the oil and gas industry. Major producers like Chevron and Exxon Mobil pay Enterprise to run their product through its pipelines. Some take the business relationship even further…

Chevron is a prime example. In 2019, it entered an agreement with Enterprise to grow its proposed offshore crude oil project in the Gulf of Mexico.

With a network that big and friends and allies that powerful, it should come as no surprise that Enterprise has a healthy balance sheet.

Net income saw a significant increase from $4.17 billion in 2018 to $4.59 billion in 2019. That’s expected to hold steady in 2020, barely dipping to $4.5 billion, which is exceptional considering how this year has gone for the oil and natural gas industries.

What’s more, Enterprise’s leaders clearly believe the company is going places. Since the start of 2020, they have collectively spent more than $11 million of their own money to buy units (shares).

The stock trades slightly below its peers at 8.4 times EV/EBITDA (enterprise value to earnings before interest, taxes, depreciation and amortization), a common metric used by Wall Street. The average midstream company trades at 8.7 times its EV/EBITDA.

That said, Enterprise’s balance sheet is healthier than its peers at 3.5 times net-debt-to-EBITDA versus the industry average of 4.4 times.

It’s a fundamentally strong company that regularly raises its dividend every year. It has taken a price hit due to circumstances outside of its control. But that works in our favor. If you act quickly before Enterprise recovers, you can lock in an 8% to 10% yield at bargain prices.

Take advantage of the low price and high yield before Enterprise bounces back.

Enterprise is the under-the-radar dividend play to make right now.

Between Enterprise’s low payout ratio, its incredible yield and its history of raising its dividend, it really is no wonder that Morningstar recently called Enterprise “compelling and undervalued.”

The company’s leadership believes Enterprise is set up for incredible growth in the coming years.

And it will flow through Enterprise’s pipelines while you profit from the tolls.

Enterprise remains my favorite play in the sector. It should be added to your portfolio if you don’t yet own it.

The Oxford Club is a financial publisher that does not act as a broker, dealer or licensed investment advisor. You should not consider any of the communications by our company and employees to you as personalized investment advice. Investment markets have inherent risks, and there can be no guarantee of future profits. Likewise, our past performance does not ensure the same future results. Any investments recommended by The Oxford Club should be made only after consulting your investment advisor and only after reviewing the prospectus or financial statements of the company.

Additionally, no person listed within our publications should be considered as permitted to engage in rendering personalized investment, legal or other professional advice as an agent of The Oxford Club. The Oxford Club does not receive any compensation for these services. Any individual services rendered to Members of The Oxford Club by those mentioned are considered completely separate from and outside the scope of services offered by The Oxford Club. Therefore, if you choose to contact anyone listed within our publications, such contact, as well as any resulting relationship, is strictly between you and the service provider.

We expressly forbid our writers from having a financial interest in their own securities recommendations to readers. All of our employees and agents must wait 24 hours after online publication or 72 hours after the mailing of printed-only publications prior to following an initial recommendation. The proprietary recommendations and analysis we present to Members is for the exclusive use of our membership. 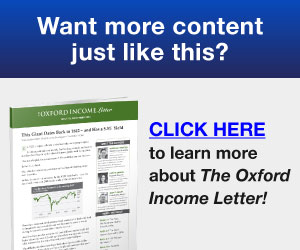