Editor’s Note: At Wealthy Retirement, we know the importance of our three core needs – shelter, food and water.

Some of the best investments come down to those basic needs, one of which we’re investigating today…

Most people know that water makes up about 60% of our bodies… But what they don’t know is that water-related investments are quietly rallying – they were up 92% for the year as of this summer.

Here to give us a closer look is our good friend Bryan Bottarelli, co-founder and Head Trade Tactician of Monument Traders Alliance and The War Room.

And without exaggeration, this might also be the most important article you’ve read all year.

You see, right now, few investors are noticing that water is becoming more valuable than ever before.

And no wonder demand is rising…

Water is becoming scarcer and scarcer by the day.

Just look at the recent news…

According to August 2021 data from the U.S. Drought Monitor, there were drought conditions across 99% of the Western United States this summer, up from 63% one year ago. In total, 59.2 million Americans and rising are now living in drought-stricken areas.

In July, the volume of Lake Oroville, California’s second-largest reservoir, stood at just 53% of its historical average.

And on August 17, the U.S. declared the first-ever water shortage at the Lake Mead reservoir, which is the largest in the U.S. In response, a total of 10 Western governors appealed for federal drought disaster aid.

It’s a crisis – and it’s getting worse by the day.

In response, water futures are blasting higher, and – amazingly – nobody even realizes it.

Case in point: Earlier this year on the Chicago Mercantile Exchange, water futures were up nearly 92% for the year – to $936.22 per one-acre foot. They’re currently at $861 leading into October 2021, and nobody – from what I’ve seen – has covered it on the news.

If oil prices doubled, it would be a front-page story.

But water prices just doubled, and nobody said a word.

Of all the water plays available, my favorite is the Invesco Global Water ETF. It’s an exchange-traded fund that invests in businesses designed to conserve and purify water for homes, businesses and industries.

It was up 21% earlier this year, and remains in the double digits going into the fall.

With one investment in the Invesco Global Water ETF, you’ll own the top water stocks in the world. Here’s a look at its top holdings… 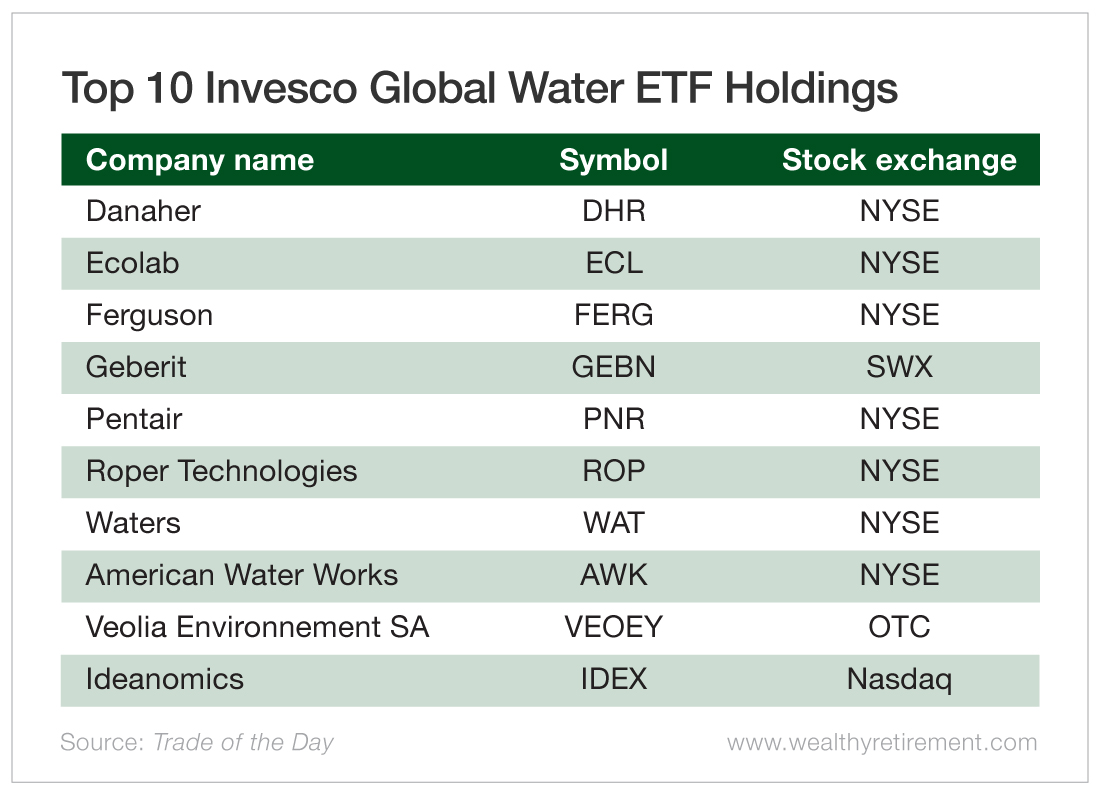 Droughts in California and historical lows in our country’s reservoirs make the case for plays on water, which is our most precious resource.

In additions, there are worsening supply and demand imbalances, unmistakable proof of climate change, and a hesitancy to address water conservation and desalination upgrades.

Add it all up, and the Invesco Global Water ETF looks like a stable and consistent way to profit off humankind’s most critical resource.

Graduating with a business degree from the highly rated Indiana University Kelley School of Business, Bryan got his first job out of college trading stock options on the floor of the Chicago Board Options Exchange (CBOE). There he was mentored by one of the country’s top floor traders in the heart of the technology boom from 1999 to 2000 – trading in the crowded and lively Apple computer pit. Executing his trades in real time, Bryan learned to identify and implement some of his most powerful trading secrets… secrets that rarely make their way outside the CBOE to individual traders.

Recognizing the true value of these methods, Bryan tapped into his entrepreneurial spirit to take a risk. He walked off the CBOE floor and launched his own independent trading research service called Bottarelli Research. From February 2006 to December 2018, Bryan gave his precise trading instructions to a small, elite group – most of which joined him on day one and have been followers ever since.

As a so-called “play tactician,” Bryan uses his hands-on knowledge of floor trading to shape opportunities and chart formations into elegant, powerful and profitable recommendations. And by using the same hedging techniques taught by professional floor traders, Bryan is able to deliver his readers remarkable gain opportunities while strictly limiting their total risk.

Along the way, Bryan has developed a cumulative track record that could impress even the most successful hedge fund manager.

He now spends his days moderating one of the most elite trading research forums ever created, The War Room.

Build Confidence in Your Options Trading