If you are even a casual observer of the stock market, chances are you are aware of the astounding action in the share price of brick-and-mortar video game retailer GameStop (NYSE: GME).

If you haven’t been following what’s happening, let me bring you up to speed… 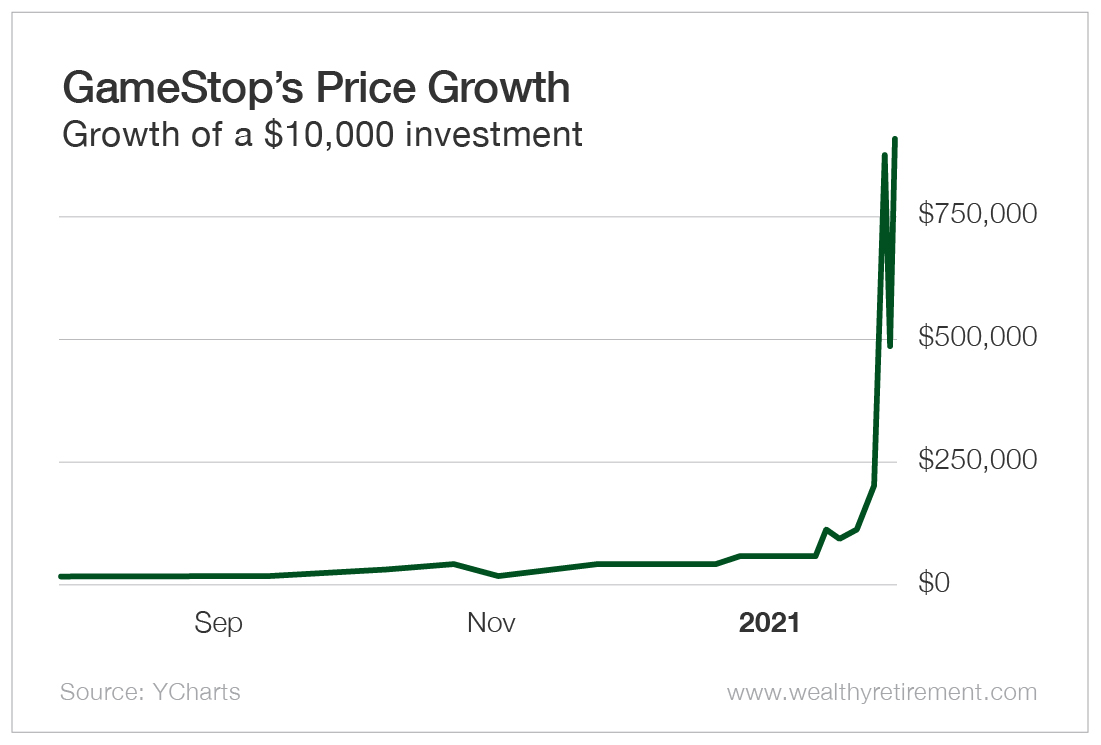 One month ago, GameStop shares were trading for $20.

If you somehow were lucky enough to have been holding $10,000 worth of GameStop shares a month ago…

Anyone who bought $10,000 worth of GameStop shares six months ago was looking at a trading position that could’ve been sold for $916,000.

Please note that I said these GameStop shares could’ve been “sold” for those amounts.

They most definitely are not!

At the stock’s price of $350 per share, GameStop’s market capitalization (share price multiplied by the number of shares outstanding) had ballooned to more than $24 billion. 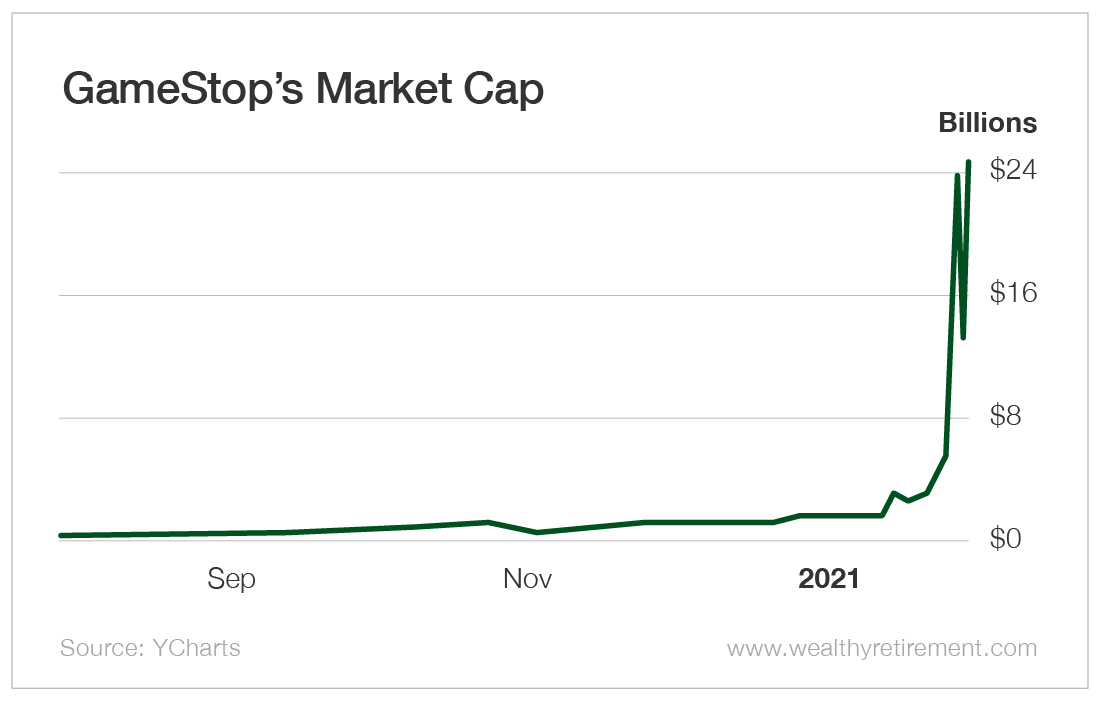 To appreciate how ridiculous that is, remember GameStop is a brick-and-mortar retailer that operates 5,500 stores that sell video games and hasn’t turned a profit since 2017.

In other words, this is the exact kind of company that is in the crosshairs of Amazon (Nasdaq: AMZN) and e-commerce.

GameStop isn’t a growth business – it is a dying business.

Yet its stock chart suggests otherwise…

This Is What Is Called a “Short Squeeze”

Ironically, GameStop’s failing business is the specific reason the share price of the company has gone ballistic.

Those poor business prospects were why Wall Street hedge funds had made GameStop one of the most shorted stocks in the market.

Shorting is when an investor (or hedge fund) borrows shares of a company because they believe the stock’s price is going to fall.

For example, let’s say a hedge fund sells borrowed shares in the market at $100 each. Then it waits until the shares fall, say to $50, and buys them back.

The borrowed shares are returned to the original owner, and the hedge fund that sold at $100 and bought at $50 pockets a nice profit.

If the share price goes up, the hedge fund loses money.

That is because it has to buy the shares back at a higher price than it sold them at.

With GameStop, a group of young, inexperienced day traders on an internet chat board called Reddit decided to inflict pain on those hedge funds that short stocks.

The retail investors have embarked on a frenzy of share buying and options trades, pushing up GameStop’s share price and putting a massive “short squeeze” on the pros.

The hedge funds that have shorted GameStop are in a world of pain.

If a hedge fund had, say, shorted $20 million worth of GameStop shares at $10 back in October, that means it is short 2 million shares.

With GameStop trading for as much as $350, the hedge fund would have needed to come up with $700 million to close out its 2 million share short position.

A loss that big is enough to put many hedge fund managers out of business.

So as you can imagine, as GameStop’s shares started to increase 100%… 200%… 300%, there was a panic among hedge funds that were short the company to close out their positions as fast as possible.

The Reddit traders sent GameStop’s shares soaring, and then the hedge funds that were forced to buy turned what was a buying frenzy into all-out buying madness.

You Can Watch This Game, but Do Not Play

GameStop isn’t the only company that the Reddit chat board traders have targeted.

They have gone after a whole list of the most shorted stocks on Wall Street in an effort to drive up share prices and squeeze the hedge funds.

Ultimately, this means these Reddit traders are intentionally buying shares and options in the worst-quality companies possible… companies that sophisticated hedge funds that have done hours of research believe are likely going bankrupt.

Will this end badly for most of the Reddit traders going long these stocks?

What they are doing is not investing.

I don’t know exactly what to call it. Even “speculation” doesn’t seem like the right word to capture the risk involved.

What I do know for certain is that it most definitely is not what we do here at Wealthy Retirement.

So go ahead and watch what is happening with these incredible short squeezes.

But do not participate.

Where There’s Smoke, There’s a 6% Yield

Is Hydrogen Fuel Cell Technology the Future of EVs?