Three-quarters of a century has passed since this infrastructure boom launched in the 1950s.

Not surprisingly, much of that infrastructure is in dire need of repair.

Further, the United States population has doubled since these infrastructure systems were put in place.

That means our infrastructure is dated and dangerously overstretched.

The American Society of Civil Engineers (ASCE) publishes regular “report cards” on the condition of infrastructure in the United States.

The ASCE recently gave U.S. infrastructure a grade of D-plus.

Under the ASCE grading system, a D-plus means that infrastructure conditions are “mostly below standard,” showing “significant deterioration” and carrying a “strong risk of failure.”

The issue is pressing, and with each passing day, the conditions get worse.

The ASCE estimated that the government needs to spend $4.6 trillion by 2025 to get U.S. infrastructure back to a state of good repair.

That’s not just for safety, but also because existing infrastructure inadequacies and bottlenecks will reduce U.S. GDP by trillions in the coming years.

It will cost the economy more to not spend the money…

How to Play the Ramp-Up in Spending

Now that President Biden’s $1.9 trillion stimulus bill has been passed by Congress, the White House’s next objective is a multitrillion-dollar infrastructure package.

Of course, all kinds of uncertainty exists about whether a bipartisan infrastructure bill can be passed…

That doubt has merit – but if not now, when?

COVID-19’s hit to the economy makes this the perfect time to pass an infrastructure bill and put people back to work.

A multitrillion-dollar plan could create millions of good-paying jobs.

Half of U.S. roads are in poor or mediocre condition, and one-third of bridges need repair, restoration or complete replacement.

That is a lot of money… and it will juice the revenues of companies in this sector.

What’s great about this infrastructure spending for investors is that it isn’t going to be a short-term burst.

The companies that will benefit will have strong financial results for many years.

This presents a long-term tailwind for investors to ride.

The most obvious way for investors to play this is through the Global X U.S. Infrastructure Development ETF (CBOE: PAVE).

The ticker symbol says it all – this exchange-traded fund (ETF) is a way to get long road repair!

The ETF includes heavy equipment, engineering and construction companies, as well as companies involved in the production of raw materials.

Unfortunately, though, we may have missed our chance with this particular ETF. 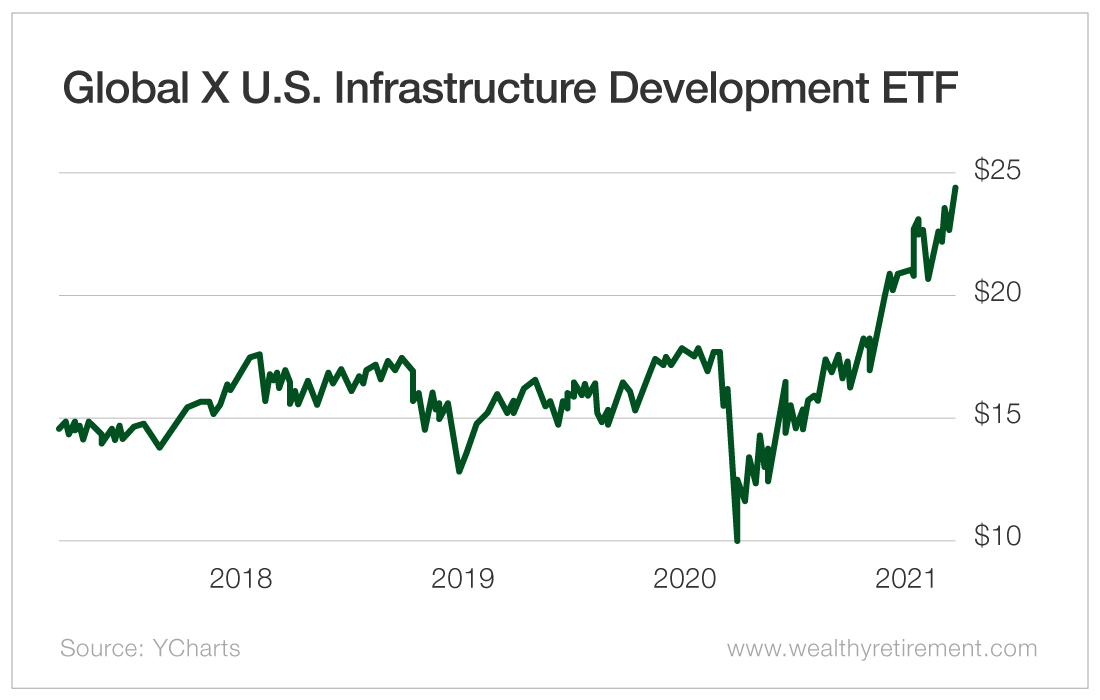 The ETF is also almost 50% higher than where it has traded at any point since it was created in 2017.

So while I do think getting exposure to massive infrastructure spending in the coming years is appealing, I’m not sure that the Global X U.S. Infrastructure Development ETF is the way to do it at this time.

As is often the case, the most obvious way to play an opportunity isn’t the best way.

Stay tuned, and I’ll dig up a better way for us to profit from America’s badly needed infrastructure upgrade…

Is It Time to Buy the Dip?

Don’t Do This When It Comes to Owning...