Tesla (Nasdaq: TSLA) recently released its third quarter earnings, and I must admit that I am impressed.

All of the important third quarter 2022 numbers impressed me…

First, revenue came in at $21.4 billion, for an increase of 55% from the same quarter last year. That is some impressive growth.

Second, net income jumped to $3.3 billion, which doubled the $1.6 billion posted in the third quarter of 2021… an even bigger increase than revenue’s!

And finally, Tesla’s balance sheet remains pristine, with $21 billion in cash and no significant long-term debt.

When you put those four things together (growth, profitability, free cash flow and balance sheet strength), you have almost everything that you could possibly want as an investor.

But you will notice that I said almost everything.

The first thing that Tesla shares are lacking is an attractive valuation.

This stock is still incredibly expensive.

Despite the share price being down 40% in 2022, Tesla’s market valuation is still a gaudy $660 billion as of this writing.

This ranks Tesla as being the sixth-most-valuable company on the planet.

Against this $660 billion market valuation, the $3.3 billion in earnings that Tesla generated in the third quarter doesn’t look so big.

For more perspective, consider that the average analyst earnings estimate for Tesla this year is $4.09 per share.

With Tesla’s share price of $210, that means Tesla is trading at more than 50 times earnings.

That is certainly a much better valuation than the stock began this year at before falling 40%, but it is still far from a valuation that I’d be willing to pay for.

In my opinion, the best perspective always comes from comparing Tesla’s valuation with those of the other most profitable automakers. 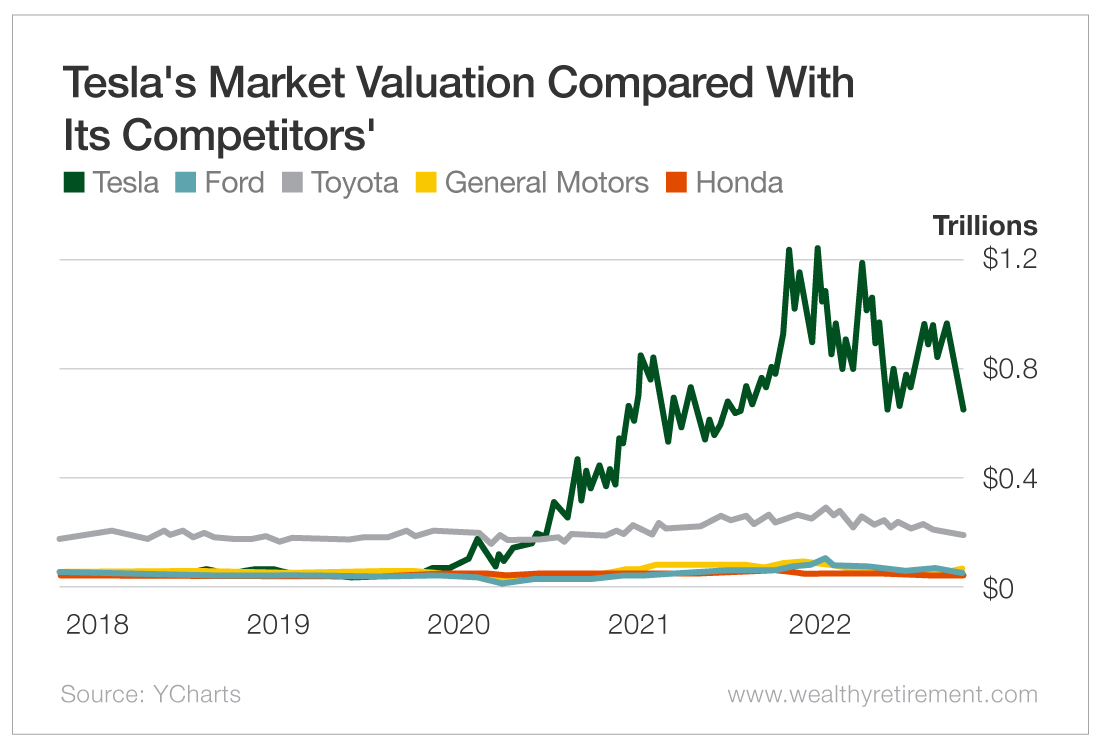 Yes, the world is transitioning to electric vehicles, but why does the market seem to assume that Tesla is going to have almost that entire market?

I don’t believe that it will.

Every other automaker is rolling out great-looking electric vehicles as well. So I think Tesla’s market valuation greatly overestimates how profitable this company will eventually end up being.

The second thing that Tesla is lacking is the ability to trust that its management is always going to be working in the best interest of shareholders.

Elon Musk is undeniably an incredible entrepreneur, but I’ve seen enough to know that I don’t want him in control of my hard-earned investment dollars.

From his adventure-selling Tesla shares to fund his Twitter acquisition… to his putting $1.5 billion of Tesla’s cash into Bitcoin… to Tesla’s very suspicious acquisition of Musk-owned SolarCity for $2.6 billion… I don’t trust this man to make decisions that are in the best interests of his shareholders.

With Musk, it is always his agenda first – and that of his shareholders second.

Tesla’s financial performance has surprised and impressed me. But the valuation is still far too optimistic, and the man in charge is still unpredictable.

There is a lot more downside risk in this stock than upside potential.

For those reasons, The Value Meter is measuring Tesla shares as “Extremely Overvalued.”

Equifax Is Priced Better by the Day

Is THIS Credit Card Processor Undervalued?

A 3.7% Yield at an Exceptional Price