Skyrocketing interest rates have become a major headwind for consumers, corporations and the stock market.

But not for the financial services firm that we’re evaluating today, which is a major beneficiary of rising rates.

Yet, despite the company seeing rising rates drive earnings higher, its share price is down this year! Because a bear market takes no prisoners…

This company provides online brokerage services for retail customers and works with registered investment advisors through its institutional services platform.

It has grown to become a very big business. In total, it now manages an astounding $6.6 trillion worth of assets.

But the company’s business model is highly sensitive to interest rates.

It makes money much like a bank. It pays customers a modest amount for cash they have on deposit. Then it earns a profit by reinvesting that cash at higher rates.

While a bank mainly reinvests that cash by lending it out as mortgages and other loans, this company simply invests it into risk-free Treasurys.

The zero interest rate policy of the Federal Reserve in recent years has been a big drag on this company’s earnings. It hasn’t been able to earn a decent profit margin reinvesting customers’ cash.

Now, this year has been a different story. The return that it can earn by holding Treasurys has gone up exponentially.

Let’s look at the U.S. five-year Treasury bond, for example, which started this year paying 1.25%. 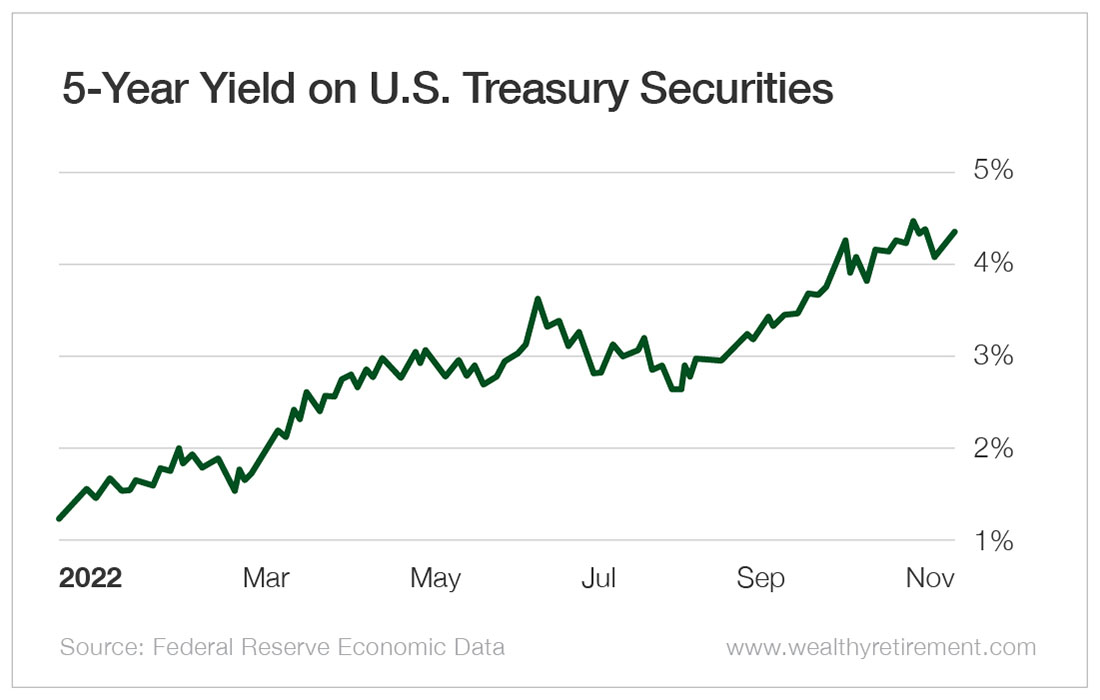 The company’s financials reflect this improvement.

And that’s why its stock is undervalued.

The company under our lens today is Charles Schwab (NYSE: SCHW).

For the quarter ending on September 30, 2022, Schwab’s net interest income jumped from $2 billion last year in the third quarter to $2.9 billion this year.

Consensus analyst estimates show that Schwab is expected to earn $4.8 billion next year. That is a 23% increase from the $3.9 billion that analysts are calling for this year.

With a current share price of $79 as of this writing, that means Schwab is trading at 16 times its price-to-earnings ratio.

While not jaw-droppingly cheap on the surface, it does look pretty reasonable for a company that will grow earnings by 20%-plus next year and has increased earnings per share tenfold since 2010. 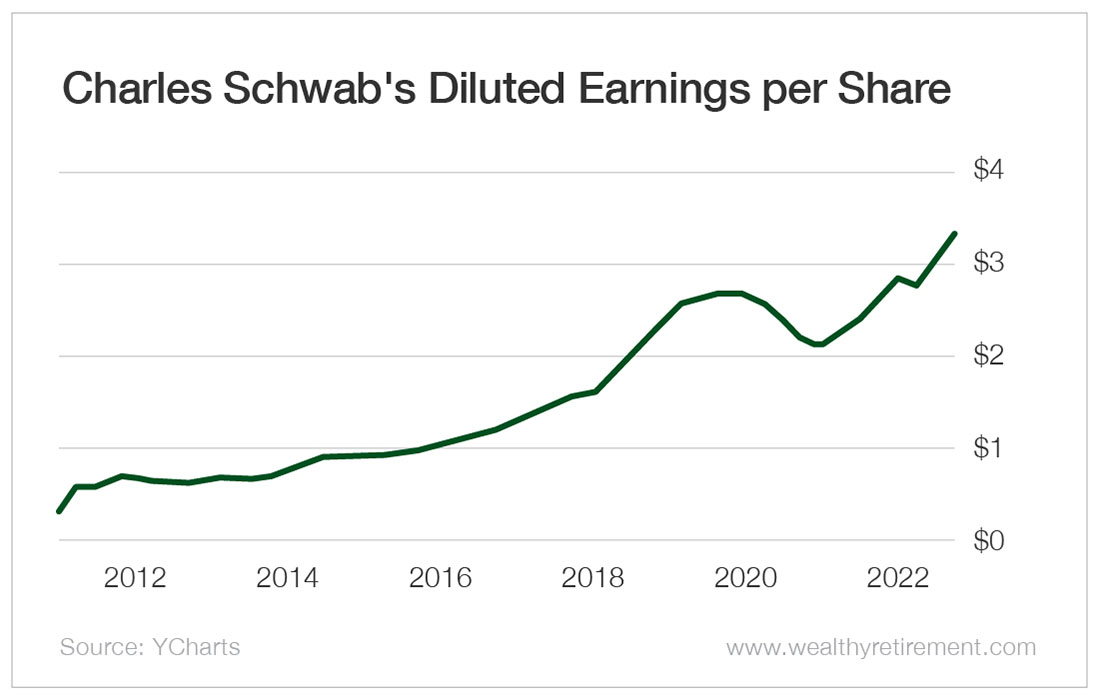 The chart above depicts Schwab’s earnings per share growth. And what makes it so impressive is the fact that interest rates have been near historic lows for almost all of this time period.

That means Schwab has accomplished this despite facing an interest rate headwind the entire time. 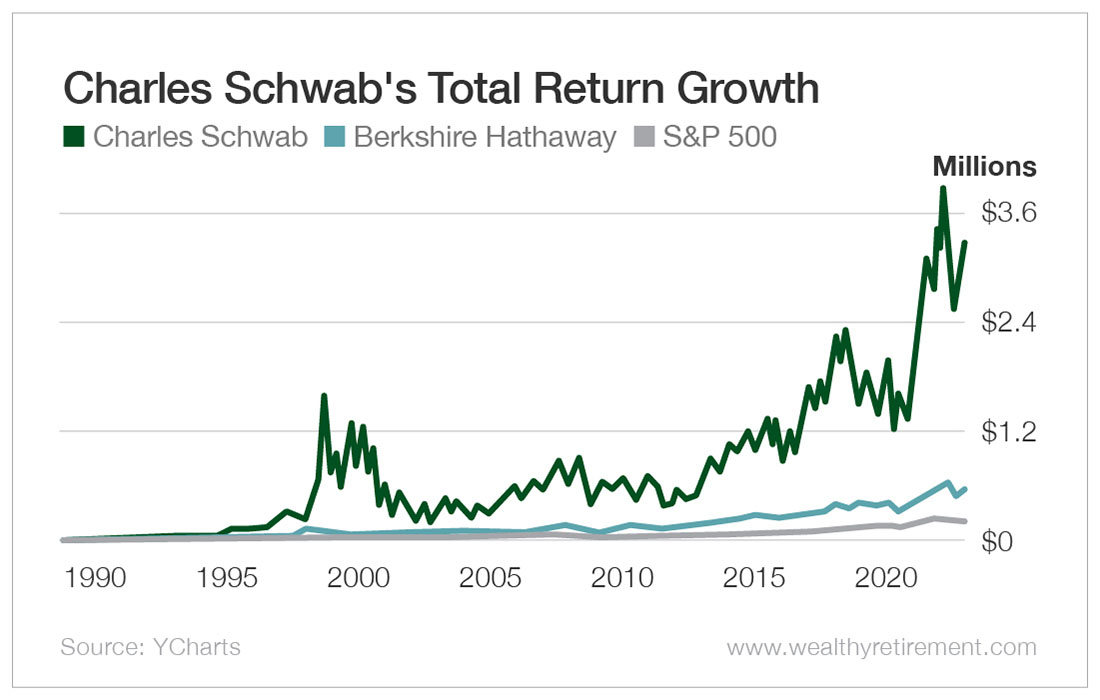 But neither the market nor the Oracle of Omaha comes even close to what Schwab has done for investors over the same time frame.

Be still, my beating heart!

Can you imagine what Schwab might have done if interest rates hadn’t been declining for those four decades?

This is a great company trading at a very reasonable valuation with an interest rate tailwind now finally helping it.

The Value Meter rates Charles Schwab as “Slightly Undervalued,” and I think we are looking at a great price to pay for this outperforming business.

If you have a stock whose valuation you’d like me to grade, leave the ticker in the comments section below.

What Sliding Cash Flow Means for This Well-Known Dividend

Election Results Are In… What Does It Mean for Your Money?

How to Buy a Major League Baseball Team

A 3.7% Yield at an Exceptional Price