Take Advantage of “Mr. Market” When He Gets Emotional

In his 1987 letter to shareholders of Berkshire Hathaway (NYSE: BRK-A), Warren Buffett imparted an allegory from his mentor Benjamin Graham that every investor should hear – especially today.

According to Graham, you should imagine that an accommodating chap named Mr. Market delivers you the various daily stock price quotations you receive on a day-to-day basis.

He is a reliable fellow, Mr. Market.

Without fail, he appears every single day and names a price at which he will either buy your security or sell you his.

While he is calm most of time, he goes through periodic fits of euphoria and depression.

When Mr. Market feels euphoric, he can see only the good in a stock and he is willing to pay an overoptimistic price for it.

When Mr. Market is euphoric, we can take advantage of him by selling him our stock.

At other times, though, Mr. Market gets depressed and he can see nothing but trouble ahead for both that stock and the world.

On these occasions, Mr. Market will name a very low price for the stock.

He becomes desperate to sell.

We can exploit Mr. Market at both ends of his emotional spectrum as buyers and as sellers.

Mr. Market Gave Us a Gift

A little over a year ago, Mr. Market wanted no part of Texas-based utility Vistra Corp. (NYSE: VST).

What happened was the blizzard-induced “Great Texas Blackout,” one of the worst power outages in American history.

Residents went without power and potable water for several days.

It was a once-in-100-years event – a freak occurrence.

During the blizzard, more than 3,000 daily low temperature records were set as a deep freeze covered the United States.

Vistra, which provides and distributes electricity to the Texan market, got hit hard financially.

When the company told investors that it would be taking a one-time loss in the range of $900 million to $1.3 billion because of the historic blackout, our emotional friend Mr. Market was distraught at the news.

He was immediately willing to sell us his Vistra shares for 30% less than he was prior to this announcement.

I called this response by Mr. Market a “Texas-sized overreaction.”

Furthermore, management also laid out measures that it would take to avoid another such loss happening should we for some reason get another once-in-a-century blackout event.

For those reasons, I felt Vistra was a safe company to own.

Equally important, I was certain Vistra shares were dirt-cheap.

At Vistra’s $8.13 billion market valuation at the time, we were buying a company that had annually generated almost $2.5 billion in free cash flow.

Free cash flow is what matters to me as an investor.

Free cash flow is the cash that a company has available to pay to shareholders a dividend, use for share repurchases, invest in earnings growth or strengthen the corporate balance sheet.

With a 30%-plus free cash flow yield, Vistra could repurchase all of its outstanding shares in three years or pay an annual 30% dividend to shareholders.

If the massive free cash flow yield wasn’t a convincing enough reason to buy Vistra, I also pointed to the fact that recent takeover transactions of similar companies pointed to Vistra being worth more than double the stock’s trading price.

Vistra was a gift that an emotional Mr. Market served up to us. And his gift has been an incredible one. 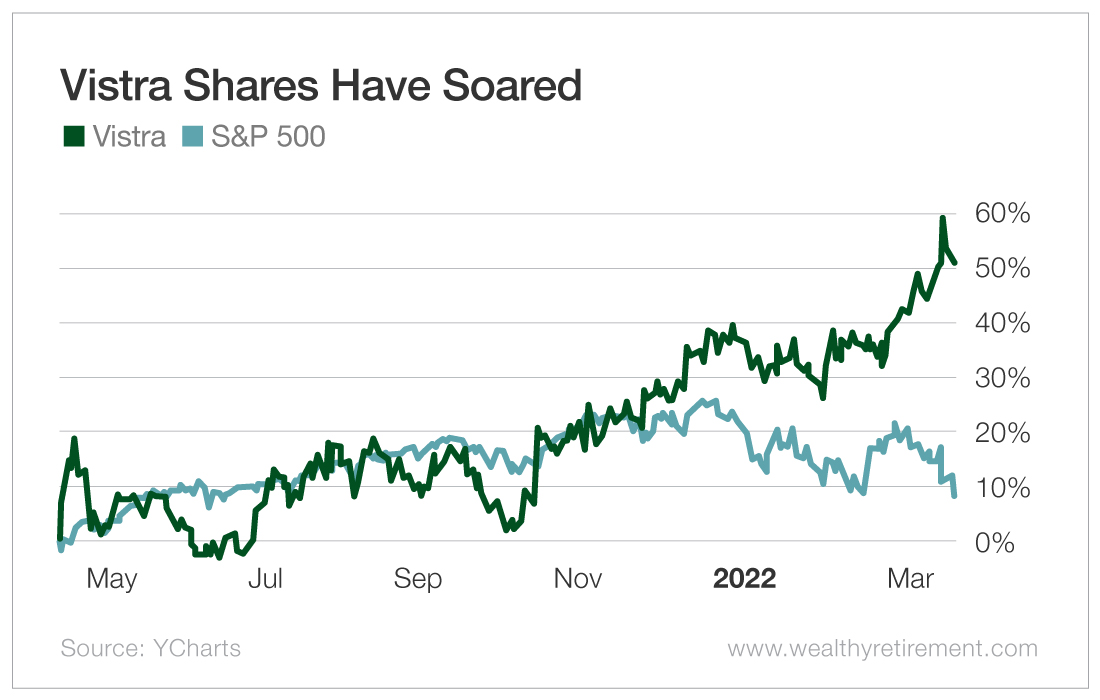 Since Mr. Market’s episode last year, Vistra shares have gone up more than 50% and have soundly trounced a now struggling S&P 500.

It took six months for this trade to work out. We just needed Mr. Market to start thinking rationally about what Vistra is really worth.

Let Dividend Stocks Protect You From the Bear Market

This Sector Has Been a Safe Haven From...

Investing in Crypto Can Benefit Your Retirement Portfolio