As the firstborn, he’s had to endure all the rookie mistakes my wife and I have made as parents. My daughter, on the other hand, benefits from what we’ve learned.

Fortunately, my son has thrived despite our best intentions. But there’s no doubt my daughter is better off for having been born a few years later to parents a few years wiser.

And I want you to learn from my mistakes…

A perfect example is my children’s 529 plans.

When my son was born, I opened a 529 college savings account for him. At the time, age-based funds were popular. And since I didn’t plan on actively managing the account, I thought this would be a decent option and a worthy experiment to see how well these products work.

Age-based plans change over time, growing more conservative as the person gets older. The idea is that as you get closer to a certain goal (college, retirement, etc.), money is taken out of stocks and moved into fixed income or other safer investments.

When my daughter came along, I opened an account with the same financial institution, but I managed it myself – not actively, mind you. I selected some cheap index funds and occasionally rebalanced when the allocation got out of whack.

The difference in the results was alarming. 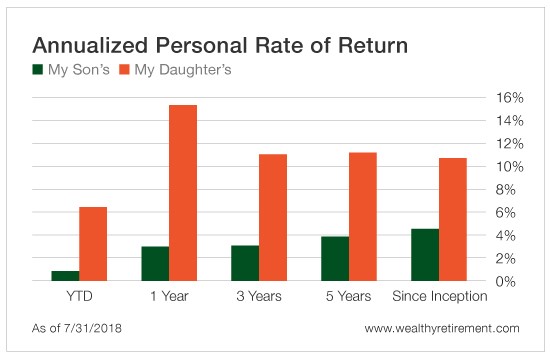 Certainly, the more conservative nature of my son’s portfolio in the near term contributed to the underperformance. But the team of professionals managing it shouldn’t underperform by 60% over the long term.

This further illustrates that investors can outperform the pros if they invest cheaply and intelligently.

Despite my more than 20 years in the market, I wasn’t actively trading my daughter’s account. Heck, I probably made only a handful of rebalancing transactions in the 14 years the account has been open.

But by investing in low-cost index funds and holding on for the long term (not getting spooked every time the market dips or a scary headline pops up), I’ve been able to generate a double-digit annual return.

The professionals managing my son’s account were not even in the same ZIP code as double digits.

For most investors, the simplest and least expensive investments are the best way to grow wealth. That’s why I advise against most annuities, whole life insurance plans, age-based plans and anything else that is needlessly costly and complicated.

I recently received an email from a reader who told me he bought 100 shares of Microsoft (Nasdaq: MSFT) in 1986. Based on Microsoft’s price that year, I assume he paid somewhere around $3,000 for his 100 shares. The exact amount isn’t important.

In 1986, commissions were around $45 per trade with a discount broker. So it’s quite possible that this reader paid a $45 fee and never spent another penny on this investment.

Talk about a cheap and simple investment.

Long-term investors should focus on strategies that are inexpensive and easy to understand and execute.

I recommend owning a portfolio of index funds. Be sure to diversify among U.S. stocks, emerging markets, developed international markets and various-sized companies.

Also include Perpetual Dividend Raisers – companies that raise their dividends every year. That way, if you’re collecting income, you’re getting a boost every year and staying ahead of inflation. If you’re still building wealth, reinvest the dividends so that you accumulate more shares like our friend who invested in Microsoft.

If you hold on long enough, you’ll not only build your nest egg but also be able to generate more income when you need it.

Be like my daughter. Benefit from the mistakes I’ve made with my son.

Keep your investing simple and cheap.