What a 1920s Gang Should Have Known About Trading

I’ve been binge-watching Peaky Blinders on Netflix. Think The Sopranos but in 1920s England. It’s very good, and the lead character, Thomas Shelby, is scarier than Tony Soprano ever was. Tony is volatile. Thomas is calculating and ice-cold.

One episode of the show takes place on October 29, 1929 – Black Tuesday, when the market collapsed, kicking off the Great Depression.

Some of the characters, like many real-life investors, were completely caught off guard and suffered devastating losses.

But Black Tuesday didn’t happen in a vacuum. The market had been falling for several days. The Thursday before, October 24, the Dow Jones Industrial Average dropped 11%. One of the show’s characters instructed his brother to sell everything on Friday – just before Black Tuesday.

Perhaps he was using the concept of support to time his entries and exits?

A support line is a price level where a stock historically stops declining. It can be a flat line all at one price, or it can be a trend line that gradually moves in one direction.

For example, here’s a chart of Compugen (Nasdaq: CGEN). 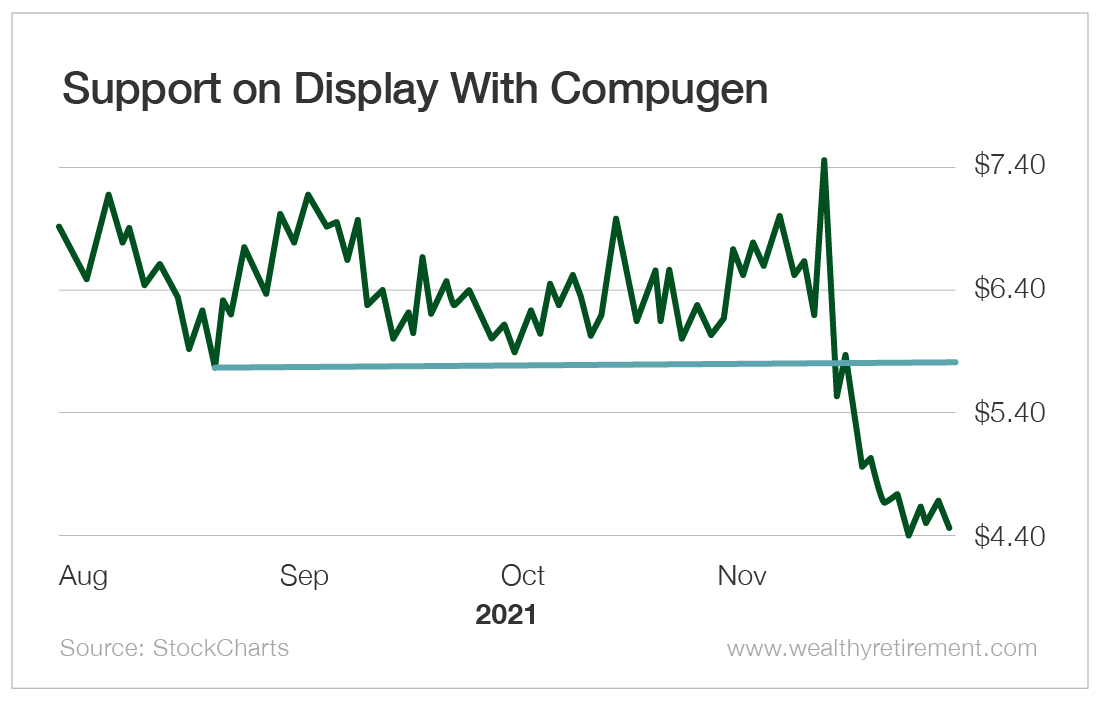 You can see that from August through October, every time the price dropped to about $5.80, buyers stepped in and supported the stock, pushing it back higher. But then, in mid-November, the buyers disappeared and no longer supported Compugen. It fell below its support line and continued to slide.

If you owned Compugen, you would have looked to get out of the trade once the stock was a few percentage points below $5.80. If you bought the stock close to $5.80 and sold close to, say, $5.60, you’d have a very small and manageable loss.

And if you bought the stock in late October around $5.80, you had the chance to make more than $1 in profit in a short period of time while taking on very little risk because you would have gotten out if the stock hit $5.60 or so.

Let’s look at a support level that isn’t flat.

This is a chart of microcap Smith-Midland (Nasdaq: SMID). 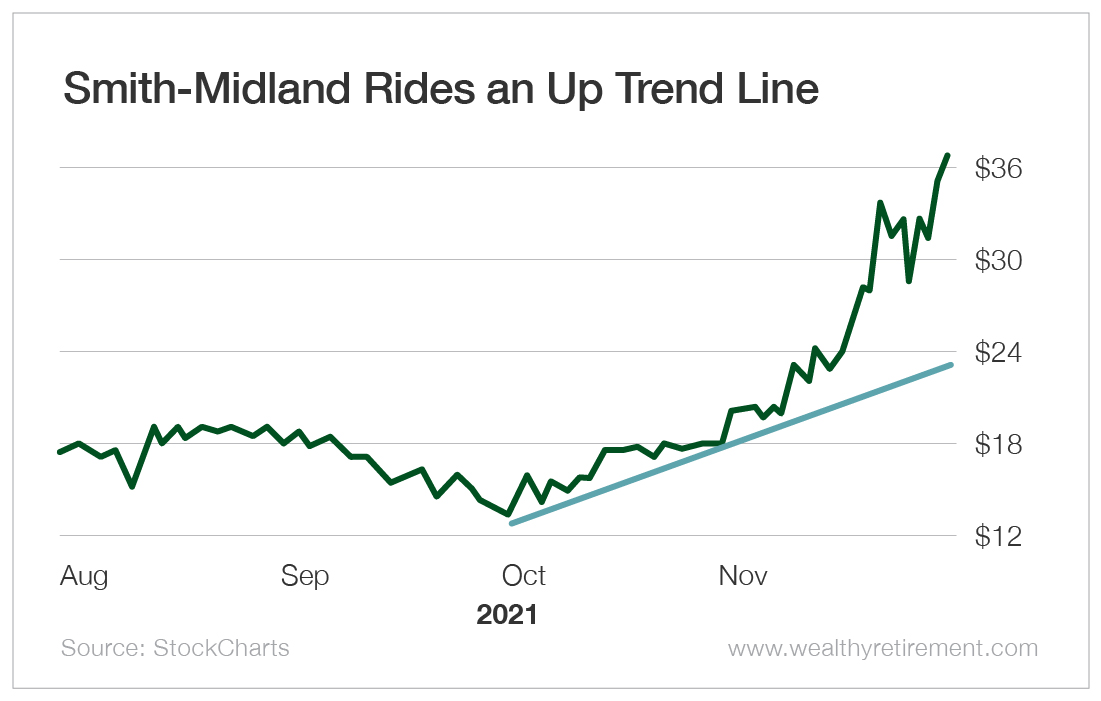 The teal line is a trend line that is moving higher. Every time the stock returned to the trend line, buyers stepped in. To create an up trend line, you draw a line from the lowest low to the highest low after a decline.

In November, when the stock hit the trend line at around $19, you could have bought the stock feeling confident that it would bounce off the trend line like it had in the past. If you were wrong, your loss would have been small because you’d have exited quickly. But if you were right, you would have kept riding the stock higher until it broke support at increasingly higher levels.

Successful trading is about managing losses and letting your winners run. Using support lines helps you do exactly that.

One character from Peaky Blinders didn’t sell his stocks as instructed (don’t worry, it’s not a spoiler). Perhaps if the Peaky Blinders gang had used support lines, a lot of chaos could have been averted. But then the show wouldn’t have been as much fun.

If you want to avoid chaos in your portfolio, use support lines in your trading.

The Stock Signal You Must Know

How to Avoid Disaster in Your Portfolio