Rock ‘n’ Roll Is Expensive (and So Is Everything Else)

“Sharp Dressed Man” by ZZ Top just finished playing on my boom box when the DJ from WPLJ announced that tickets for the band’s “Eliminator” tour were now on sale.

One of my friends suggested that we go. Tickets were $15 for a midlevel seat.

Adjusted for inflation, that ticket would be $39.22 in today’s dollars.

And for a top act like The Rolling Stones, who just announced new concert dates, you can find tickets for $97, but they’re high up on the far side of a football stadium.

An average seat in the 200 level halfway to the stage is about $247 (before Ticketmaster’s exorbitant fees).

That’s the equivalent of $95 in 1984 when I saw ZZ Top. Not too many high schoolers could’ve afforded a $95 ticket back then. It would have been the equivalent of 28 hours of work at my minimum wage job (before taxes).

Ticket prices aren’t the only thing getting expensive…

But that hardly tells the whole story.

Global food prices are up 40% in 2021. The owner of the Gristedes supermarket chain expects another 10% to 14% increase by October.

Last week, coffee futures surged the most in seven years, as drought and frost are causing problems with crops in Brazil. 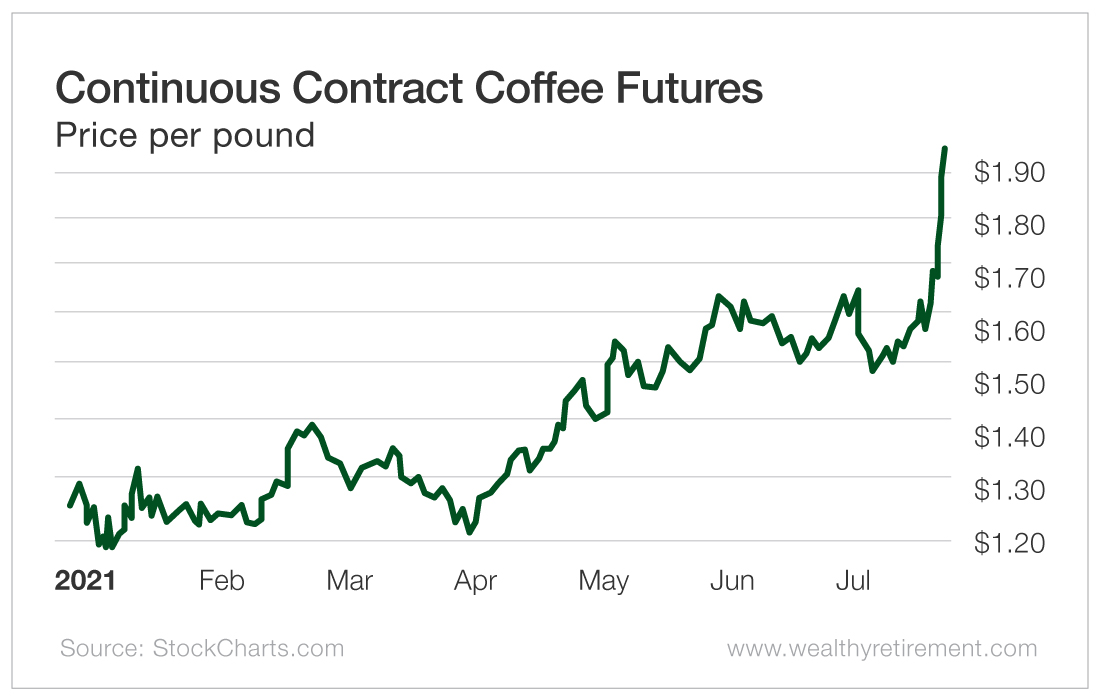 You can see from the chart above that coffee prices have risen by 49% year to date.

So you caffeine addicts may want to switch to energy drinks.

These are stocks that raise their dividends every year.

When I wrote Get Rich with Dividends, which went on to become an international bestseller published in four languages, it was with our current situation – rising prices – in mind.

I’m a child of the 1970s and 1980s. I remember inflation. And while I don’t recall it affecting me too dramatically (though I do remember when the bastards shrunk the size of the gum inside packs of baseball cards), inflation is something that I have always expected to return at some point in my adult life.

And I wanted to make sure my readers and I were prepared for it.

It’s depressing to work hard (or to have worked hard your entire life) only to see your buying power decline.

So in my book and in my monthly newsletter, The Oxford Income Letter, I created a strategy that could achieve the opposite effect. I set out to find stocks that not only would generate long-term profits but also would increase investors’ buying power every year.

Moody’s (NYSE: MCO) has raised its dividend every year for 12 years. Over the past 10 years, the annual dividend growth rate was 16%.

If you had bought shares of Moody’s in July of 2011, your quarterly dividend was $0.14 per share, which came out to a yield of just 1.5%. Ten years later, the dividend has more than quadrupled and is now $0.62 per share.

The income you received from the stock grew by a huge 17.6% rate annually, keeping far ahead of the low inflation of those 10 years. Your buying power increased, not to mention that the stock rose 1,000% during that period too.

Hormel Foods (NYSE: HRL) is another good example. It’s the company that makes Spam. Not the kind that hits your email inbox – the meat in a can.

Hormel has lifted its dividend every year for 55 years. Lyndon B. Johnson was in the White House when it started raising it. The top song on this date in 1966 was “Wild Thing” by The Troggs. It was a long time ago. That’s a heck of a track record.

And over the past 10 years, Hormel has raised the dividend an average of 14% per year.

These are the types of stocks you want to own as prices for nearly everything rise. If you can find a stock whose dividends are growing at a double-digit clip, your income can handle even a jump to a 7% or 8% inflation rate.

Most people think only about profits when it comes to stocks. I want to be sure that while I’m waiting for those profits, my income is going up at the same time.

In this rising inflation environment, I strongly suggest you do the same.

If you do, then maybe I’ll see you down on the floor at the Stones’ show…

The Highest Yields in Consumer Staples

An Innovative Entertainment Company for $0.50 on the Dollar

What Being a Rock Singer Taught Me About...

Here’s What the GameStop Insanity Means

When Wouldn’t You Invest in Dividend Growth?