I hope you had a great Fourth of July and that all of your fingers and toes are in the same place as they were on the 3rd.

Inevitably, every year, some numbskulls can’t count themselves in the group of people mentioned above, blowing off a digit or more with their amateur fireworks displays.

Everyone thinks CEOs are so smart. And the truth is, many of them are.

But as a group, they consistently make terrible decisions when it comes to buying back their companies’ shares.

Now, I’m not talking about buying the stock for themselves. When their own money is at stake, they have a good track record. But when your money is on the line, they spend like a congressman spending on a pork project for their own district.

Stock buyback amounts fell by nearly one-third last year – not surprising considering the uncertainty of the pandemic and the desire to conserve cash.

Though, after the sell-off in February and March 2020, the CEOs of companies with flush balance sheets should have been licking their chops when it came to repurchasing shares and generating a better return for shareholders. Instead, they pumped the brakes hard.

Then, the market rebounded and they hit the accelerator. So far this year, S&P 500 companies have authorized $567 billion in share repurchases – the highest amount in 22 years at this point – eclipsing the entire $520 billion repurchased last year.

These figures include recent buyback announcements by ConocoPhillips (NYSE: COP), which added an additional $1 billion to its existing repurchase agreement, and gigantic repurchases by Alphabet (Nasdaq: GOOG) for $50 billion and Apple (Nasdaq: AAPL) for $90 billion.

In my bestselling book Get Rich with Dividends, I cited a 2011 study published in Review of Finance that determined large companies do not repurchase shares at below-average prices.

The authors concluded that executives at large companies are “more interested in the disbursement of free cash.”

In other words, the optics of buying back shares are more important to them than actually creating shareholder value by repurchasing shares at an attractive price.

For example, in 2007, which was then a record year for buybacks, the S&P 500 had a paltry return of 3.5%. The following year, the markets fell apart and the financial crisis was in full effect – just after CEOs bought back a record amount of stock.

Since 2015, stock repurchase increases and declines have occurred at exactly the wrong times. 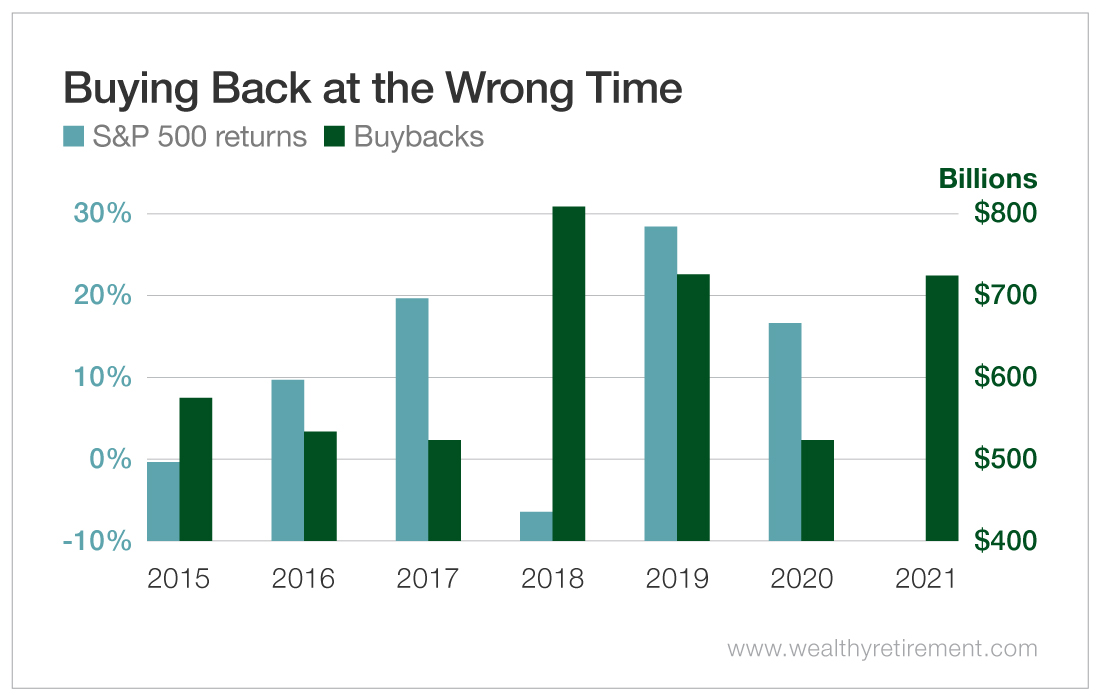 In other words, buybacks and performance moved in opposite directions of each other.

This year, Goldman Sachs expects a whopping $726 billion in buybacks to occur from S&P 500 companies. That may not be such a good thing.

I want to see my companies buying back shares when the market is terrible. I want my companies’ executives to know they have good businesses with plenty of cash flow and can buy their shares back at below-average valuations.

If that’s not the case and they have excess cash, then it should be used to pay dividends and let the shareholders decide whether to reinvest the dividend into more shares of the company or hold on to the cash.

CEOs are people too, and they are subject to the same emotions as everyone else. They buy when things look great and stay on the sidelines when they’re scary. But history shows us again and again the smart move is to do the opposite.

So for 2021, with markets at all-time highs, I want to see cash used for dividends, not buybacks.

If buybacks were fireworks, there’d be a lot of CEOs missing fingers…

This Play on American Banks Just Keeps Getting Better

How to Earn Income the IRS Won’t Touch

Stocks or Bonds? Try the Best of Both...

How to Ensure Your Dividends Are Safe

3 Guidelines to Ride Out a Bear Market

How to Correctly Use Moving Averages

How to Make Order Out of Market Chaos

Why You Should Consider Owning Rental Property