Count on This Number to Create Wealth

We hope you enjoy what Justin has to say!

A lot can happen in a few weeks…

A few weeks ago, I ran a short poll to get Oxford Club Members’ takes on the possibility of a recession. And the results are in…

Seventy-four percent of Members responded that we were headed for a recession. The remaining respondents held out hope that it wasn’t inevitable.

Of course, we now know the truth. With two consecutive quarters of negative GDP growth, we’re in a recession.

But here’s the thing…

In that same poll, I asked a second question to determine Members’ current mindsets as investors.

Were Members going all-in on cash… sitting on the sidelines and waiting for a bottom… or looking for opportunities to strategically play the current market?

An overwhelming majority of respondents – 76% – are looking for ways to profit. I was thrilled to see that result, considering that’s exactly what we do at The Oxford Club.

In fact, something new just hit that I wanted to share with you today…

Back in May, a few dozen Oxford Club staff members sat inside a windowless conference room in Destin, Florida. The waves of the Gulf were beckoning us through the walls.

But we weren’t there for the beautiful white sand beaches. We were meeting with our Oxford Club chief strategists – including Chief Income Strategist Marc Lichtenfeld – to brainstorm new investment ideas and strategies to help Members through this difficult market.

Marc had an idea that I was immediately intrigued by. He had “a way to spot when a current uptrend (or downtrend) in an individual stock is about to change direction using technical analysis.”

Over the past several weeks, I’ve written a little bit about a technical indicator that I use called the Sequence Counter. This was created by legendary technical analyst Tom DeMark.

One of the methods he created is the 9-count. What DeMark found is that when a stock closes higher than where it was four days earlier – for nine straight days – the move typically is exhausted and the stock reverses. The same is true for the downside.

Starting next week, I will begin using the 9-count in Technical Pattern Profits with a very short-term outlook. Because I expect these positions to have “micro-bounces,” I anticipate holding them for only a few days. We’re looking to exploit these quick reversals. My hope is that if we enter a position on a Monday, we’re out by Friday.

I’ll still be using the other patterns, such as the channels, head and shoulders, and flags, as well. The Project 9 trades are in addition to the others, so there will be more trades coming your way.

A way to predict exactly when a stock is about to shift direction just by counting to 9?

Sounds too easy, right? I certainly thought so when Marc first told me about it back in Destin.

But then he showed me some charts that illustrated the power of Project 9.

As you can see in the three examples below, each stock was in a clear upward or downward trajectory.

Yet after a proper 9-count was reached using this technical indicator, the stock shifted direction almost immediately. 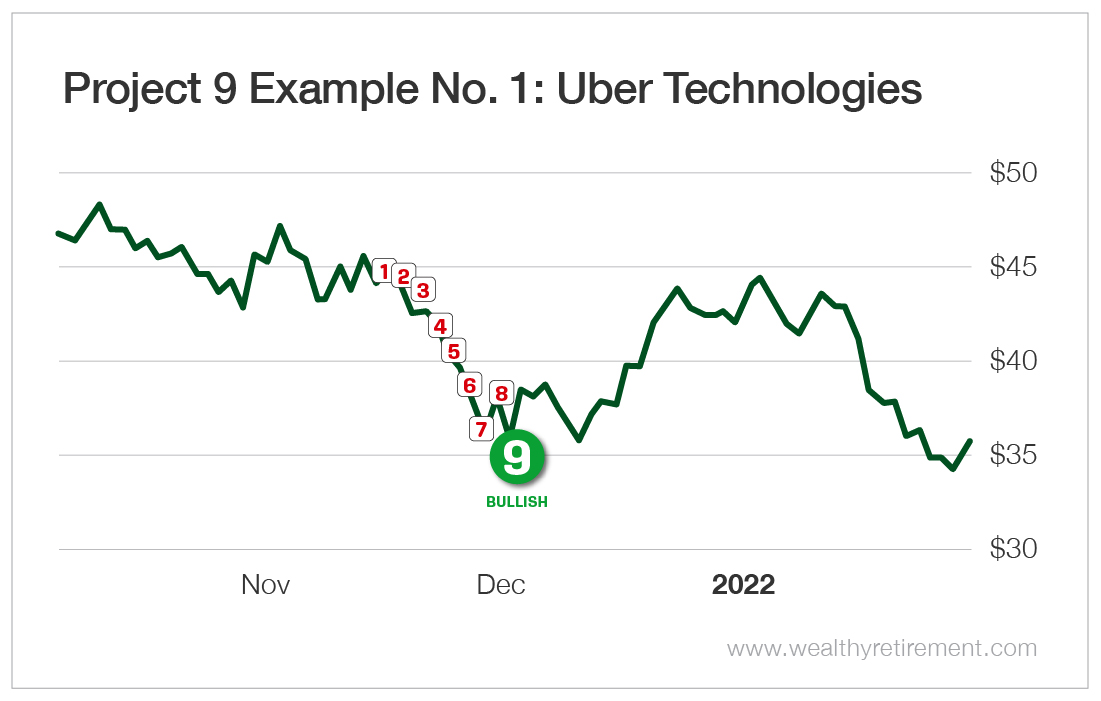 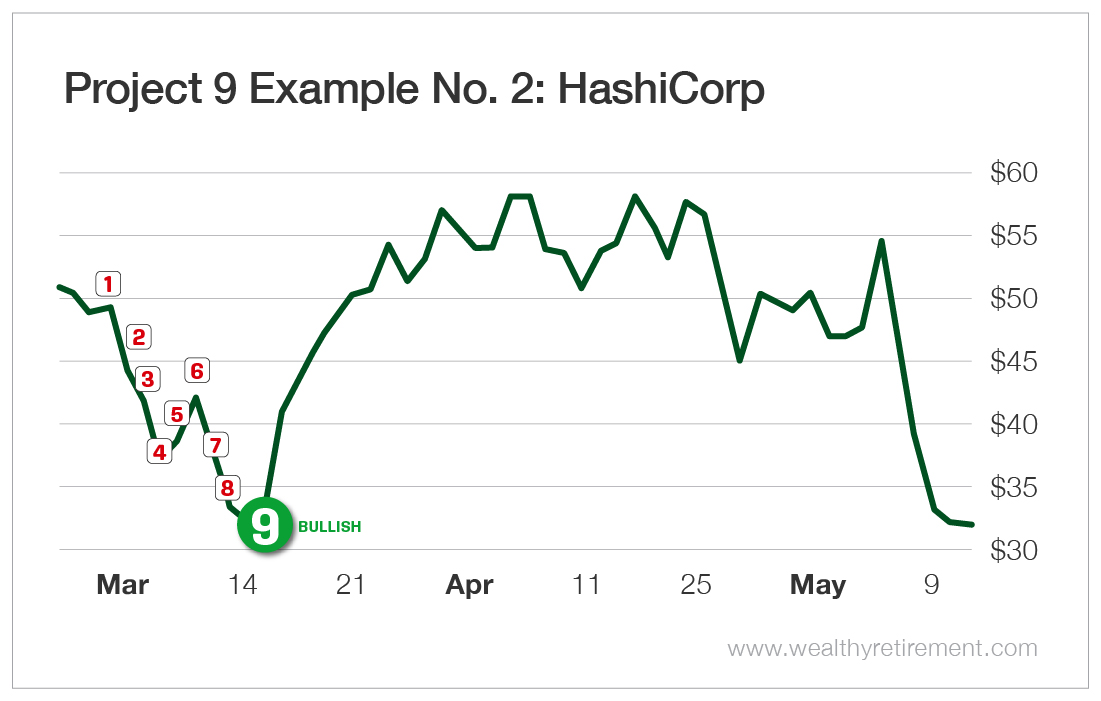 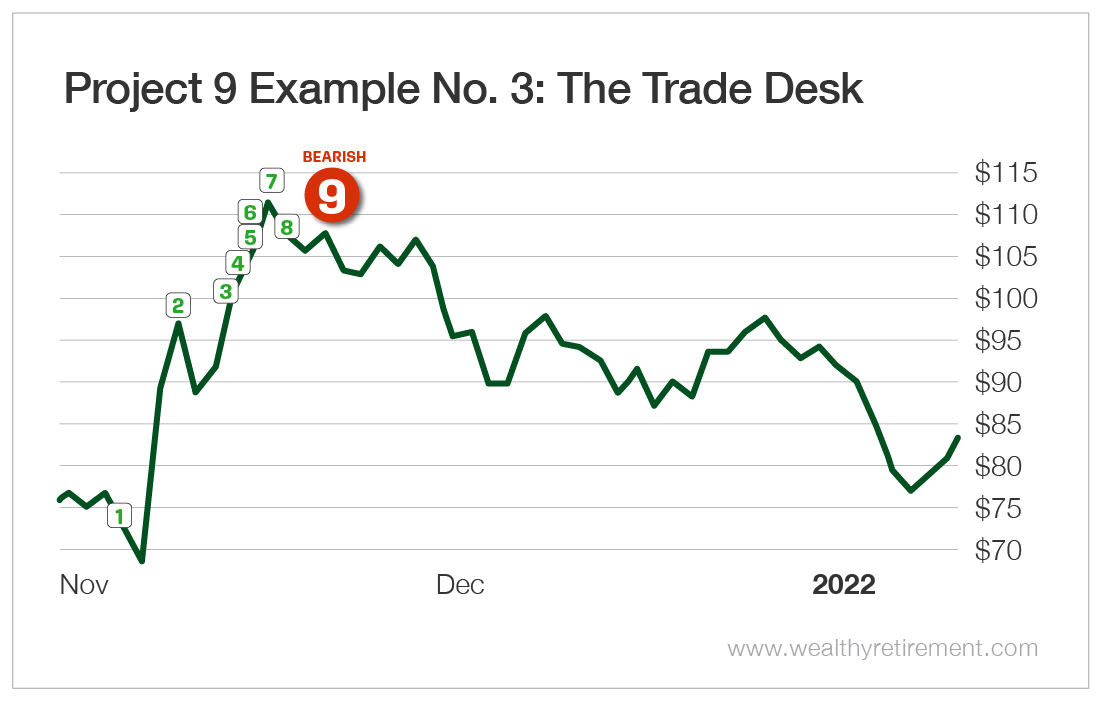 After Marc showed me these examples, I was hooked.

Especially because Project 9 can indicate a reversal in either direction. So it’s perfect for this volatile market.

I’m so excited about the launch of this new strategy.

If you’re already a Member of Technical Pattern Profits, I hope you’re excited about the fresh opportunities that Project 9 unlocks.

And if you’re not yet a Member and you’re interested in learning more, go here to see Marc’s full training video on the strategy.

A 10%-Yielding Up-and-Comer That Looks Solid

Don’t Trust Analysts Who Have Conflicts of Interest

The Major Reason to Love Bonds

Give Your Kids a Head Start